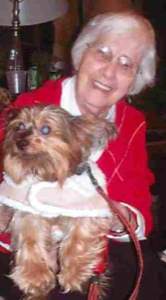 Jeanne Marie Watkins, daughter of Wilbur and Hazel (Kennedy) Hotchkiss, was born May 24, 1926 at Central City, Nebraska. She passed from this life peacefully at her home in Mankato, Kansas Saturday, April 7, 2012. She was 85 years of age. She grew up in Nebraska along with her brothers Don, Bill, and Larry and sister Helen. Years later, Jeanne moved to Indiana and worked at the State House. This is where she met Bernard Watkins. On April 19, 1943 they were united in marriage and they were blessed with the birth of their daughter, Jan in 1945. Jeanne also worked many years as a service representative for the Lozier Company. Following retirement, Jeanne opened a ceramic and porcelain doll shop in Irvington. Bernie and Jeanne moved to Byron, Nebraska and she lived there until he died in April 2004. She then moved to Mankato to be near her daughter and family. Jeanne was an amazing wife, mother, grandmother, and sister. She was preceded in death by her parents, husband Bernie, daughter Jan Swanson, grandson Jason Swanson, brothers Bill, Bobbie, and Kenny Hotchkiss, sister Helen Voss, and nephew Charles Voss. She will be forever remembered by her brothers Don and wife Pat, and Larry of Omaha; grandchildren Jeanne Kuhlman and husband Justin, Chester, NE, James Swanson, Byron, NE, Amber Swanson, Moorcroft, WY, and Jack Swanson, Jr. and son-in-law Jack Swanson, Sr. of Mankato, KS; great grandchildren Ashley Swanson, Sean Swanson, Calvin Collins, Michael Collins, Hannah Collins, Loetta Swanson, and Cammy Swanson.

Funeral services will be held 11:00am Tuesday, April 10, 2012 at Evangelical Lutheran Church in Mankato, Kansas with Pastors Dennis Beckmann and Jim Germer officiating. Burial in St. Paul Lutheran Cemetery, Byron, Nebraska. Memorials may be made to the Mankato VFW Auxiliary or Solomon Valley Hospice.

To order memorial trees or send flowers to the family in memory of Jeanne Watkins, please visit our flower store.