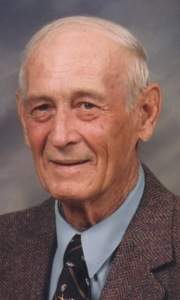 John Arden Vishnefske, 82 years of age, of Belleville, Kansas died June 29, 2011 at Belleville Health Care Center. He was born June 29, 1929, on the family farm in Republic County, Kansas, the son of John H. and Olga (Brzon) Vishnefske. Johnie graduated from Belleville High School with the class of 1946. Following his education, Johnie served his country in the U.S. Army during the Korean War entering in 1952 and was honorably discharged in 1954. On April 21, 1956 he was united in marriage to Pauline Marie Bachand in St Joesph, KS. To this union 5 children were born; Mark, Myron, Sharon, Jan, and Tina.   Johnie was a lifetime farmer in Republic County until his retirement in 1991 at which time Johnie and Pauline moved to Belleville. Johnie was a lifetime member of the VFW and a member of the Concordia Moose Lodge. He enjoyed golfing and the many friendships developed at the Republic County Golf Course. Johnie was preceded in death by his parents, and one sister, Delores Dunback and brother-in-law Dean Dunback. He leaves to mourn his wife Pauline of Belleville; three sons, Mark Vishnefske and his wife, Patty of Mulvane, KS; Myron Vishnefske of Inavale, NE; Jan Vishnefske of Belleville; two daughters; Sharon Fuentes and her husband, Eric of Holdrege, NE; Tina Haefke and her husband, Mark of Holton, KS. Fourteen grandchildren; Sr. Dara of Denver, CO, PFC John of the U.S. Army, Michelle, Karen, Paul, Elizabeth, and Andrew Vishnefske of Mulvane; Chrissa Bridgmon and her husband Richard of Fairbury, NE, Andrea Vishnefske of Lincoln, NE; Monica Mueller and her husband Bryan of Kearney, NE, Mario Fuentes of Lincoln; Brandon, Ryan and Nathan Haefke of Holton; three great grandchildren; and a host of nieces, nephews, and other relatives and friends. Visitation will be held Thursday, June 30, 2011 from 5:00 to 9:00 pm at Tibbetts-Fischer Funeral Home in Belleville. Rosary and vigil services will be held at 7:30 pm at the funeral home. Funeral mass for John A. Vishnefske will be at St. Edwards Catholic Church in Belleville, Friday July 1, 2011 at 10:30 am. Interment will be at Union Valley Cemetery in Republic County. A memorial has been established in his memory and will be designated at a later time. Tibbetts-Fischer Funeral Home, Belleville, Kansas was in charge of these arrangements.

To order memorial trees or send flowers to the family in memory of John Vishnefske, please visit our flower store.