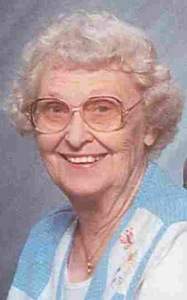 Judith Elizabeth Kueker, daughter of Nelson & Lucille (Ahrens) Ward was born February 15, 1921 in Belleville, Kansas. She passed from this life as her family was by her side on Thursday, April 19, 2012 at the Republic County Hospital in Belleville. She was 91 years of age. Judy was raised in the Belleville community attending the public schools and graduating from Belleville High School with the Class of 1938. She attended Kansas State University as well. On December 12, 1941 she was united in marriage to Ralph J. Kueker and together they had three children, Judy Beth, Cynthia, and Rick. Judy was a partner with Ralph in the North Central Insurance and Real Estate Agency for 43 years. She was a faithful member of the United Presbyterian Church of Belleville serving as Elder, Deacon, Trustee, Sunday School Teacher, and served with the United Presbyterian Women. Judy was very active in the community as well. She was a member of P.E.O. Chapter BM and the Order of Eastern Star since 1941 and the Belleville Shakespeare Club since 1947. Most of all she enjoyed her family, especially her grandchildren. Judy was preceded in death by her parents; husband Ralph in 2008; daughters Judy Beth Norlin in 1983 and Cynthia Swartz in 1999; brother Guy Ward; and sisters Virginia Dungan and Lucille VanGundy. She will be forever remembered by her son and daughter-in-law Dr. Richard and Susan Kueker, Concordia, Kansas; grandchildren and great grandchildren: Kristin & Geoff Gembala and children Josh, Alyssa, Braeden, Conner, Overland Park, KS, Dr. Kara & Aaron Gorski and children Trevor and Nathan, Alexandria, VA, Dr. Nicole Cossaart & Dr. Ben Cowley and daughter Olivia, Oklahoma City, Ryan and Amy Swartz and daughter Rowan, Overland Park, KS, Brad Swartz, Columbia, SC, Dr. Ryan and Jessica Kueker and children Cadence and Regan, Wamego, KS, Julie and Charles Bowers and children Kassidy and Madalyn, Concordia, KS, Dr. Richard and Rachel Kueker and children Avery and Ellesyn, Concordia, Richelle Kueker, Topeka, KS, and Matthew Kueker, Omaha, NE; son-in-law Kent Swartz, Republic, KS; many other relatives and a community of friends. Visitation will be Sunday 5-9pm and Monday 9-9pm at the funeral home. Funeral services will be held 10:30am Tuesday, April 24, 2012 at the United Presbyterian Church in Belleville, Kansas with Elder Joe Detrixhe officiating. Burial was in the Belleville City Cemetery. Memorials may be made to the church. Tibbetts-Fischer Funeral Home, Belleville, Kansas is in charge of these arrangements.

To order memorial trees or send flowers to the family in memory of Judith Kueker, please visit our flower store.