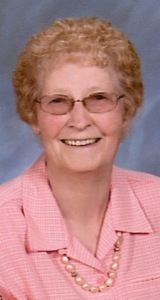 Flowers:  May be sent to Tibbetts-Fischer in Belleville or Megrue-Price in Superior

Lela Joan Albertson, daughter of Frank and Hanna (Ahlvers) Darling, was born October 6, 1931 at Beloit, Kansas. She passed from this life Wednesday, November 28, 2012 while a resident of the Belleville Health Care Center in Belleville, Kansas. Joan was united in marriage to Rex Albertson on October 7, 1951 at Mankato, Kansas and to this union two children Rick and Debra were born. Joan and Rex lived in Bostwick, Nebraska for a short time, but spent most of their married life farming near Republic, Kansas. Although they moved into Republic, Rex continued farming until his health failed in early 2002. Rex passed away in September 2002. Joan continued to live in Republic until she moved to Belleville due to her failing health. She was a faithful member of the United Methodist Church of Republic and was involved in many community activities. Joan drove the school bus transporting the children of the Republic area to Belleville for many years. Her first love though was her home and taking care of her family. She enjoyed card games, watching old westerns, collecting duck and doll figurines, and especially being with her grandchildren and great grandchildren. She will be greatly missed. Joan was preceded in death by her parents Frank and Hanna; husband Rex; sisters Helen Ewer, Irene Gholsen and Geneva Sloan; and brothers Wilbur, Max and Doyle Darling. She will be forever remembered by her children Rick Albertson and wife Jackie of Republic, Kansas and Deb Swiercinsky and husband Greg of Belleville, Kansas; grandchildren and great grandchildren Tisha (Perry) Johnston and son Paden, Brandi (James) Lewis and daughter Haley, and Tabitha (Cody) Frybarger and daughters McKinzie & Mallory; her sisters Leota Heiden and Carol Clyde, Superior, NE and Doris Baylie, Holdrege, NE; brother Rex Darling, Worcester, MA; many nieces and nephews; other relatives and friends.

To order memorial trees or send flowers to the family in memory of L. Albertson, please visit our flower store.