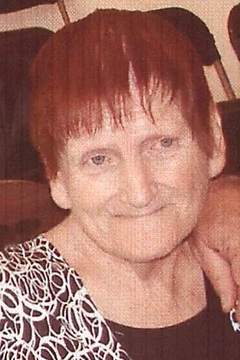 LaNoma Maye Barton, daughter of Warren and Ellen (Shultz) Melvin was born November 1, 1943 at Fairbury, Nebraska. She passed from this life Thursday, April 10, 2014 at the Republic County Hospital in Belleville, Kansas. She was 70 years of age.  Shortly after being born, her father called her “Penny” and everyone called her “Penny” to this day. She attended Fairbury public schools and graduated from Fairbury High School. She was married to Beford Eugene Barton on February 22, 1964 at the Central Christian Church and to this union two daughters, Lorna and Joyce, were born. Penny was a bookkeeper and tax preparer for many years.  She and Gene had Barton’s Plumbing and managed the business affairs.  She also had the smoke shop in Belleville for several years. Penny loved to create projects with her hands, especially knitting and crocheting afghans and blankets for her family.  Penny and Gene owned a home in Cawker City, Kansas for many years and enjoyed being there especially after they retired from the plumbing business. As her health began to fail, they decided to move back to Belleville. Penny was preceded in death by her parents; and most recently her daughter Joyce White. She will be forever remembered by her husband of 50 years, Gene Barton of their home; daughter Lorna Lindsey and husband Jay; son-in-law John White; granddaughters Jessica Weathersbee, Jazmen White and Bailey White; great grandchildren Gavin Rowland and Harley Weathersbee; brother Michael Melvin and wife Karen of Lincoln, Nebraska; other relatives and friends.

Graveside services and burial were held Monday, April 14, 2014 at the Pleasant Ridge Cemetery, rural Norway, Kansas.  Pastor mark Imel of the Central Christian Church was the officiant. Memorials may be made to the family’s choice. Tibbetts-Fischer Funeral Home, Belleville, Kansas was in charge of these arrangements.

To order memorial trees or send flowers to the family in memory of LaNoma Barton, please visit our flower store.