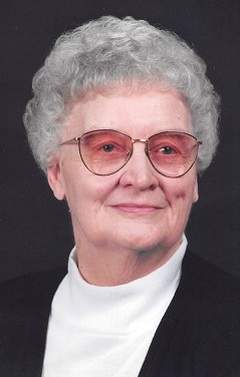 NO VISITATION, DIRECT CREMATION WAS CHOSEN.

Leila E. Gunn, daughter of Roy and Jesse (Zook) Young, was born January 23, 1929 in Powell, Nebraska. They moved to Republic, Kansas when she was a small child.  She acquired the nickname “Chick” from her brothers and the name lasted a lifetime. Leila completed 12 years of school in Republic, Kansas and graduated from Republic High School with the Class of 1946. On February 1947, she was united in marriage to Charles W. Gunn and to this union three children were born: Gayle Elaine, Patricia Ann, and John Charles. In her early years, Leila worked as a telephone operator, an assistant to Dr. Noble, and a waitress at the café as well as many years working beside Charles on the farm. The Republic post Office was “Chick’s” life for many years, as a carrier, clerk, and the OIC for Republic and Webber, until she retired in 1995. She was a longtime member of the Republic Methodist Church and served on many boards; she was on the City Council for many years and served as Mayor of Republic; also she a life member and officer in the American legion auxiliary Unit No. 332. Chick moved to Belleville, Kansas in 2005. She enjoyed reading, Bingo and most of all her family and dear friends. Leila “Chick” passed from this life Monday, May 14, 2018 at the Belleville health Care Center. She was preceded in death by her parents; husband Charles in 1990; her daughter Elaine Petty in 2007; and her grandson Barton Charles Carlisle; and siblings Aileen, Jake, Norm, and Byron. Chick will be forever remembered by her daughter Patricia Barnett, Belleville; son John Gunn and wife Kristin; son-in-law Bill Petty of Oklahoma; four grandchildren; Jessica Barnett, Olathe, Alex Gunn, Colorado Springs, Laura Gunn, Denver, and Eleanor Witt (Kevin), Iowa City; 4 great grandchildren; twins Gregory and Natalie Witt, Adele and Clara Gunn; many loving family members and friends.

Memorial services will be 11:00am, Saturday, May 19, 2018 at the United Methodist Church, Republic, Kansas. Direct cremation was chosen by the family and inurnment will take place prior to the service. In lieu of flowers, family suggests memorials be made to the Republic or Belleville Libraries. Tibbetts-Fischer Funeral Home, Belleville is in charge of these arrangements.

To order memorial trees or send flowers to the family in memory of Leila Gunn, please visit our flower store.