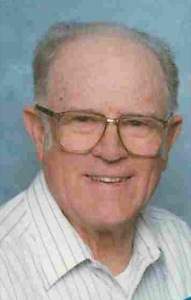 Leo Franklin McCall, son of Charles and Hazel (Dufield) McCall, was born February 28, 1920 at Horace, Nebraska. He passed form this life Wednesday, January 4, 2012 while a resident at the Republic County Hospital Long Term Care in Belleville, Kansas at the age of 91 years. Leo spent 8 years in the United States Army. He was a Morse code radio operator serving during WWII with the 76 th Field Artillery Battalion and also in Japan during the Korean War. He was called a "dit" jockey after the dit & dahs of the Morse code. Leo retired from Shell Chemical Company in Colorado and spent many happy years traveling and camping with the love of his life. He was married to Blanche Hess on July 1, 1951 at Brighton, Colorado. Leo logged many miles on his motorcycle making and meeting friends across the country. One of his many character strengths was his sense of humor which he freely shared with anyone he met. Even during his declining health, he managed to bring a smile to those around him. Leo was preceded in death by his parents; son Leo, Jr. and sister Mary. He will be greatly missed, but forever remembered by his wife Blanche of their home; children James McCall of Washington, Sandy Sivets of North Carolina, Robert McCall of Ohio, Ed Carlson, Ron Carlson, Deborah Garner and Karen Smith all of Colorado; 21 grandchildren; 20 great grandchildren; brother Ralph McCall of Colorado; many other relatives and friends. Leo chose direct cremation with no local services. His inurnment will be held at the National Cemetery, Ft. Logan, Colorado. Tibbetts-Fischer Funeral Home, Belleville, Kansas was entrusted with these arrangements.

To order memorial trees or send flowers to the family in memory of Leo McCall, please visit our flower store.