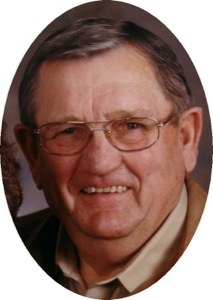 Lewis John Jr. Duensing, age 76, son of John and Alida(Heitmann) Duensing, beloved father and grandfather departed to be with our Lord on Tuesday, July 7th,2010.  Lewis was born to John and Alida (Heitmann) Duensing on April 10, 1934 on the family farm near Byron, Ne. Lewis was baptized at  St Paul Lutheran, Byron Ne April 29, 1934.  Lewis was confirmed at St John Lutheran, Byron Ne, May 16, 1948. Lewis graduated from in 1951.  After high school, Lewis worked as a farmer with his father and did light construction work.   Lewis served in the US Army and was stationed in where he served as a Military Police Officer in 1956-57.  After serving in the Armed Forces, Lewis returned back to Byron as a farmer and worked on the family farm for the remainder of his life. In addition, he was involved with the Byron Implement Dealership. Lewis married Gladys Mae Gebhards on April 17 th 1960.  To this union three children were born: Kirk John, Tobe Alan and Jennifer Sue.  Lewis was a loving husband, father and grandfather. He especially enjoyed his grandchildren and attending their activities.  Among the things Lewis loved other than farming were working in his shop building tools and machinery to be used on the farm, playing cards with his relatives, playing practical jokes on his many friends and family, and fishing with his grandsons and nephews. Lewis was an active member of , Byron Ne,  his entire life.  He served on the Church Council at for many years.   In addition, he served on the school board in Byron, was a member of Lions Club, Thayer Co Hospital Board, Thayer County Feeder's Board and sat on many boards of the local Coop branches.  Lewis served three terms as a Thayer Co. Commissioner, retiring in 2006.  Lewis is survived by his children: Kirk John and wife Eve (Renz), their children Elizabeth, Trevor, and Cole of rural Byron.  Tobe Alan and wife Robyn (Myers), children Layce and husband Clint Siemsen, great grand daughter Grae,  Trey, and Hunter of rural Byron.  Jennifer Sue and husband Todd Crosbie, son Maximilian of Golden CO.   Sisters: Lola Eitzmann, Byron,  Esther Elting, and Verna and Jim Lambert, Sister in law and husband Marjorie and Ernest Wollenberg, .  Sister in law, Cena Vieth of Ashton, Ne. and many nieces, nephews, relatives and friends.   He is preceded in death by his wife Gladys, sister Loriene Eitzmann and her husband Adolph Eitzmann, brother in-laws Fred Vieth, Martin Eitzmann and Glenn Elting, his parents John and Alida Duensing, nephew, Lonnie Wollenberg and niece, Teresa Vieth.

To order memorial trees or send flowers to the family in memory of Lewis Duensing, please visit our flower store.