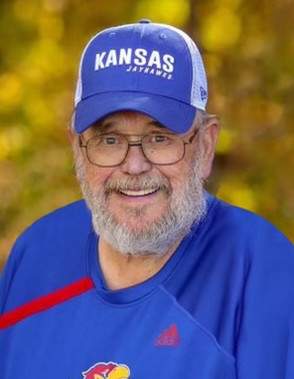 Lonnie spent his early years growing up in Scandia, KS, with his parents and younger brother. Lonnie attended Scandia schools and graduated from Scandia High School in 1965, in the first class to graduate from the new high school building. After high school, he attended Beloit Vo-Tech, studying auto mechanics, and then worked for Frye Motors.

In June of 1967, Lonnie was drafted into the United States Army. He received Basic Training at Fort Leonard Wood, MO, and Advanced Infantry Training in Fort Polk, LA, before being sent to Vietnam to serve for one year. When he returned to the states, he served the remainder of his enlistment at Fort Knox, KY. While serving our country, Lonnie was awarded the Vietnam Service Medal, Vietnam Campaign Medal, Combat Infantryman Badge, National Defense Service Medal, Expert Rifle Marksman Badge and the Bronze Star Medal.

After returning home, Lonnie worked as a mechanic, shop foreman and car salesman for Kling Motor Company, then as a carman for the Rock Island Railroad until it went out of business. He then went to work for the City of Belleville as a part-time police officer on weekend shifts. In 1980, Lonnie became a full-time officer and so began a career spanning nearly 40 years in law enforcement. Lonnie was a patrolman for years before being promoted to Assistant Chief. In June 2009, Lonnie retired from the Police Department after 29 years. After sitting out his mandatory 60 days, he went back to work for the Police Department helping cover shifts as needed. He also worked part-time for the Republic County Sheriff’s Department, mostly doing prisoner transports. Lonnie worked almost 10 more years in these part-time duties.

Lonnie often told people he was born with a fishing pole in one hand and a gun in the other. His love of the outdoors, hunting and fishing brought him great joy through the years. He was an accomplished shot with guns and in archery. He was a member of the Salt Creek Archers and won many trophies due to his talent with a bow, as well as shooting blue rocks and handguns.

Fishing was Lonnie’s other outdoor passion. Whether it was spending time at Pete’s Pit and farm ponds or fishing tournaments, Lonnie loved being on the water with a pole (or ten) with him. He was a member of several fishing clubs through the years. Tournament fishing took him to many lakes in Kansas, Missouri and Oklahoma. These tournaments brought him lifelong friends.

Lonnie’s prowess with a gun and fishing pole not only resulted in numerous awards, but also provided a freezer full of meats that he loved to cook and share with friends. Lonnie was able to go to Canada fishing a number of years with a group of men from the Republic County area and a fishing trip to Alaska with his brother and uncle, George Stromberg, was a highlight. In recent years, going to Canada again several times, the last being with Lonnie’s youngest son, son-in-law and his father, were special times for him. Lonnie was in the first class of men to become Kansas Hunter Education Instructors and gave yearly classes for more than 20 years until classes moved online. He taught many second-generation hunters in his later years.

On July 9, 1988, Lonnie was united in marriage to the love of his life, Diane Blackburn. Diane’s two children, Chad and Mindy Hallack, provided a ready-made family which was completed with the birth of their own son, Will. Lonnie and Diane were blessed to celebrate 34 years of marriage this summer. During their married years, Lonnie gave his life to Christ and became a member of the Belleville Wesleyan Church.

Lonnie was preceded in death by his parents, Godfrey and Evelyn Boman of Scandia, and father-in-law John Blackburn of Courtland.

Lonnie will be forever loved and remembered by his wife, Diane, of the home; son Chad Hallack of Belleville, KS, daughter Mindy Oppriecht and husband Ethan of Derby, KS, and Will Boman and wife Alyssa of Belleville, KS. Lonnie loved seeing his grandchildren grow and enjoyed watching them participate in many events. Those grandchildren are Noah and Emmalee Oppriecht of Derby, KS, Cailyn Hallack of Beloit, KS and Aria Boman of Belleville, KS. Lonnie claimed many other children as “his” kids and grandkids, and he loved them fiercely. Lonnie is also survived by his brother Larry Boman and wife Jan of Scandia, KS, mother-in-law Judy Blackburn of Courtland, sisters-in-law Nancy Blackburn and husband John Cox and Joni Blackburn all of Columbus, NE, Jana and husband Troy Calkins, nephew Evan Calkins and niece Claire Calkins all of Olathe, KS, as well as many cousins, family and friends.

A Service of Remembrance will be held at the Belleville Wesleyan Church on Monday, August 1st, 2022, at 2:00 p.m., with Pastor Mark McGregor, Pastor Roy Roper and Pastor Kermit Oppriecht officiating. Burial with Military Honors will follow at Riverview Cemetery in Scandia.

Visitation will be Sunday, July 31st, from 4:00 pm – 8:00 pm, with family greeting friends from 6pm – 8pm, at Tibbetts-Fischer Funeral Home in Belleville.

In lieu of flowers, Lonnie requested memorials be made to Connor’s Cuddles in care of Tibbetts-Fisher Funeral Home. Lonnie also requested casual attire at his service.

Tibbetts-Fischer Funeral Home is assisting the Boman family with these arrangements, www.tibbettsfischerfuneralhome.com

To order memorial trees or send flowers to the family in memory of Lonnie Boman, please visit our flower store.