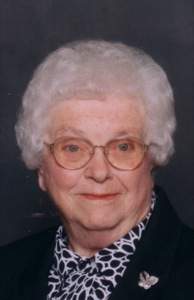 Lorene Eleanor Lesovsky Cossaart, 89, of , , passed away peacefully, Sunday, October 10, 2010, at the Presbyterian Manor in , after a series of recent health issues claimed her life. Lorene was a faithful wife, loving mother, doting grandmother, caring aunt, and a compassionate and loyal friend to all: "Well done, good and faithful servant." Lorene was born July 24, 1921, on a farm near , KS to Elmer and Eleanor B. (Marsicek) Lesovsky. She attended , District #86, , KS, and graduated from in 1939. She married Leslie (Olin) Cossaart on May 11, 1941, at her family's home near . She and her husband were lifelong members of the Narka community where she raised her family and helped around the farm with the livestock and crops. She moved from the family farm to Country Place Senior Living, , in March 2009 when health issues prevented her from living alone. Lorene was an active member of her community for her entire life. She was a member of the Narka Presbyterian Church and received a Certificate of Honor for her lifelong dedication and contributions to its ministry. She was also an active member of Presbyterian Women in Narka. She was a member of Ophel Chapter 115, Order of the Eastern Star where she served as a diligent secretary for many years until the chapter merged with another chapter. She also was a member of the U & I Club and Narka Auxiliary Club where she supported her community. She was a member of various card clubs over the years where she enjoyed the fellowship of friends and playing cards. She supported her children and community through the local and county 4-H clubs where she was always willing to lend a helping hand. In addition to spending time with her family and friends, Lorene enjoyed playing cards, crocheting, doing crossword puzzles, going shopping, and baking. She is preceded in death by her husband, Leslie (Olin) Cossaart, on October 28, 1992, as well as her son, David Cossaart; grandsons, Heath, Gordon, and Gabriel Cossaart, and Zachary Crowe; brother, Raymond Lesovsky; and parents. Lorene will be forever remembered by her daughter, Janice and husband Floyd Morgison, Perry, KS; son, Marvin Cossaart, Salina, KS; daughter, Pamela and husband Robert Crowe, Overland Park, KS; four grandsons, Kevin Morgison and wife Tamra, Perry, KS, Kent Morgison and wife Jenny, Lecompton, KS, Timothy Cossaart and wife Kathy, Hays, KS, Dustin Cossaart, Belleville, KS; four granddaughters, Kelly Miesner and husband Douglas, Parkville, MO, Kristen Graff and husband Loren, Salina, KS, Alexandra and Michaela Crowe, Overland Park, KS; seven great-grandchildren; four step-great-grandchildren; four step great-great-grandchildren; and a host of extended family and friends. Visitation will be held Thursday, October 14 from 5-9pm with family greeting friends from 7:00 to 8:30 at Tibbetts-Fischer Funeral Home, . Funeral services will be held at 2:00 p.m., Friday, October 15, 2010, at Narka Presbyterian Church with interment at immediately after the services. The family suggests in lieu of flowers that memorial contributions be made in Lorene's memory to Narka Presbyterian Church or a charity of choice. Condolences may be expressed at www.tibbettsfischerfuneralhome.com

To order memorial trees or send flowers to the family in memory of Lorene cossaart, please visit our flower store.