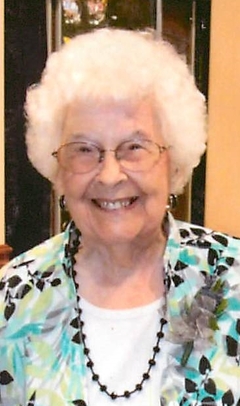 Lorene Faye (Dart) Goodrich passed from this life Thursday, July 14, 2016 in Belleville, Kansas at the age of 96 years. She was born August 22, 1919 in Agenda, Kansas to Earl and Katherine (McKenzie) Dart. Lorene attended school in Agenda for 11 years and graduated from Narka High School with the Class of 1937. She was united in marriage to Ray Goodrich on June 27 th 1941 in Las Vegas, Nevada and he preceded her in death in May of 1990. Lorene lived in California for 33 years where she worked for AT&T Telephone Company as a supervisor. They retired and moved to Belleville in 1980. She was a member of the Belleville Presbyterian Church where she served as a Deacon and involved in the Bible Study groups. She was also a member of the “As You Like It Club” and the Eagles Auxiliary. She loved to playing cards, belonging to 4 Bridge clubs and a Mah Jong group. She was preceded in death by her parents; husband Ray, and sister Pauline Hardenburger. She will be forever remembered by her brother E. J. Dart and wife Sharon of Colorado Springs; nieces Vernona & Garrison, Cheri Morton; nephews Mike & Diane Hardenburger, Bob & Cindy Hardenburger, Phil & Anne Hardenburger, Mike & Patty Dart, Jeff Dart, and Gary Goodrich; other relatives and a host of friends.

To order memorial trees or send flowers to the family in memory of Lorene Goodrich, please visit our flower store.