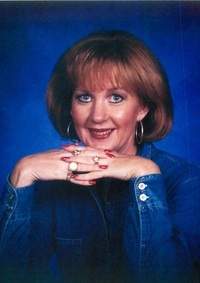 Margaret (Maggie) L. Johnson was born April 26, 1954 in Concordia, KS to Herbert and Ruth (Hampton) Christian.  She passed from this life on Wednesday, October 9, 2013 at Sunset Home, Concordia, KS at the age of 59.  Maggie graduated from Clyde High School in 1972 and then attended cosmetology school in Salina.  Shortly after she married and had two children Erin Lynette and Jamie Deann.  Years later, after her marriage had ended, she was fortunate to meet James (Jim) Drury and they were wed in 1988.  Together they bought the building on the corner of 6 th & Washington in Concordia which became the new home for both their businesses; Creations and The Razor’s Edge.  In 1993 Jim became ill and Maggie cared for him until his last day in July of 1993.  In January of 1995 Maggie married Michael (Mike) Johnson of Courtland, KS where they moved one year later.  After moving to Courtland with Mike, Maggie continued to own and operate Creations until retiring and selling the business in 2002.  The new flexibility allowed them to take many wonderful trips together and gave her the ability to be present for all the grandchildren starting to arrive.  In addition to loving her eight grandchildren, Maggie was also very involved in her community.  In her faith, she remained a member of the First United Methodist Church in Concordia and actively attended and participated at the Ada Lutheran Church near Courtland.  Maggie served as President of the Courtland Art Center and on the board of directors for the Swedish American State Bank.  She was a member of the Republic county Red Hats and the Courtland Pride Club.

Funeral  services to be held at the First United Methodist Church in Concordia on Tuesday, October 15, 2013 at 2:00pm with Pastors Tessa Zehring and Kenneth Parker officiating.  Maggie’s family will be receiving family and friends at Chaput- Buoy Funeral Home in Concordia, KS on Monday evening from 6:00 to 8:00 pm.  Memorials may be made to the Maggie Johnson Memorial Fund.

To order memorial trees or send flowers to the family in memory of Maggie Johnson, please visit our flower store.