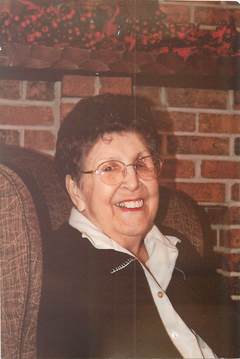 MEMORIALS TO THE BELLEVILLE MEALS ON WHEELS PROGRAM

Belleville, Kansas, resident Marcia J Leeding, 87, passed away Thursday, May 18, 2017, at Belleville Healthcare Center, Belleville, Kansas. Marcia was born February 3, 1930 in Belleville, Kansas to Charles E. and Ethel (Emricke) Baker. She graduated from Belleville High School in 1948 and attended the University of Kansas. Marcia married Don Leeding on December 31, 1951 at the Methodist Church in Belleville, Kansas. Two children, Don Robert and Sharon K, were born to this marriage. Don preceded her in death on October 28, 2005. Marcia was owner and operator of Baker's Dress Shoppe in Belleville, Kansas. It was a fashionable dress shop started by her mother, Ethel Baker. Marcia enjoyed a loyal business base from northern Kansas and southern Nebraska and thoroughly loved her customers and business life "on the Belleville Square". She retired and sold the dress shoppe in 1997. Marcia was a member of the Methodist Church in Belleville. In her younger years, Marcia enjoyed playing bridge, being active in Relay for Life as a cancer survivor, and attending her Shakespeare Club gatherings. But mostly, Marcia enjoyed her golf at the Belleville Country Club. Marcia was preceded in death by her parents; husband, Don Leeding; daughter, Sharon K Leeding; and a brother, Jack E. Baker. Survivors include her son and daughter-in-law, Don and Stephanie (Retzlaff) Leeding of Doniphan, Nebraska; 2 grandchildren, Jason Leeding and Sheri Crawford; and a dear friend, Kathy Anderson of Belleville, Kansas. During her time at the Belleville Healthcare Center, Marcia received loving care and had established many great friends. For that, her family is most grateful.

Graveside services & interment were held Monday, May 22, 2017 at the Belleville City Cemetery where she was laid to rest by her husband Don. Memorials in Marcia’s honor may be made to the Meals on Wheels program of Belleville in care of Tibbetts-Fischer Funeral Home, Belleville, Kansas.

To order memorial trees or send flowers to the family in memory of Marcia Leeding, please visit our flower store.