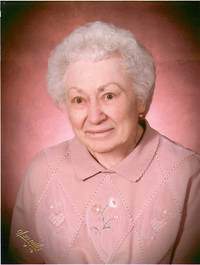 Margaret Evelyn Reed, the daughter of Margaret Elizabeth (Ford) and William Roy Adams, was born January 16, 1921, at Oak, Nebraska.  She departed this life on Wednesday, October 16, 2013, at the age of 92 years and nine months.  Her family moved to a farm near Nora, Nebraska in 1930. She graduated from Nora High School in 1937 at the age of 16.  After graduating, she attended a teacher's college at Hebron, Nebraska for one year, then on to Chicago where she worked as a maid and waitress at a boarding house.  Following that, she went to work at the Salvation Army headquarters where she took shorthand and typing classes. After becoming a captain in the Salvation Army she went to Wichita, Kansas and worked at an unwed mother's home. In 1946, she returned to Chicago and took her nurses training at Presbyterian Hospital.  After becoming an R.N. she went to St. Louis to work in a hospital there.  She then took post-graduate training in Jersey City, New Jersey and later left the Salvation Army and went to Boise, Idaho, and worked as a nurse in labor and delivery.  After her father died in 1953 she returned to Superior, Nebraska where she was acting administrator at Brodstone Memorial Hospital. On October 14, 1955 she was united in marriage with Donald William Reed and to this union was born Kathryn Sue Reed and Robert Eugene Reed.  In 1958, she and Don moved to a farm near Courtland.  She was active in the United Methodist Church of Courtland and in her leisure time she enjoyed quilting, liked to play cards, and loved spending time with her grandchildren. She was preceded in death by her parents, her husband, three brothers, Rolland, Bryce, and Gerald and three sisters, Ethel, Edith, and Vivian. Margaret will forever be remembered by her daughter Kathy Long and husband Don of Courtland, son Bob Reed and wife Becky of Courtland, brother John Adams and wife Wanda of Superior, Nebraska, three grandchildren; Blake Reed, Brittany Reed, and Brianna Long, and many nieces and nephews.   Funeral services were held 11:00am Saturday, October 19, 2013 at the United Methodist Church in Courtland, Kansas with Pastor Kathy Aeillo officiating. Burial was in the Courtland Cemetery. Memorials may be made to the Courtland Methodist Church. Tibbetts-Fischer Funeral Home, Belleville, Kansas was in charge of these arrangements.

To order memorial trees or send flowers to the family in memory of Margaret Reed, please visit our flower store.