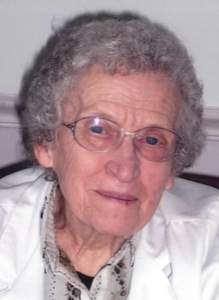 Marguerite Hanshaw, the oldest of five children born to Richard "Dick" and Lucille (Hauschel) Menke was born March 26, 1923 on the family farm in Washington County, Kansas near Morrowville. She passed form this life Tuesday, July 16, 2013 at the Republic County Hospital in Belleville at the age of 90 years. She graduated from Morrowville High School, received her normal training and taught for a few years in the rural schools. On December 26, 1941 she was united in marriage to Virgle O. Hanshaw and to this union three children were born: Dennis, Norman, and Cheryl. Marguerite and Virgle lived on their farm near Haddam, Kansas until they moved to the community of Washington, Kansas. She loved tending to her home and family, making sure that every detail was accounted for. During their married years they enjoyed going to dances, community events and having family gatherings. In her spare time she enjoyed quilting and playing cards. During the last few years her home was in the Belleville community. Marguerite was preceded in death by her parents; husband Virgle; son Norman, daughter-in-law Cathy Hanshaw; granddaughter Carmen Hanshaw; and brother Perl Menke. She will be forever remembered by her daughter Cheryl Zenger and husband Willard of Haddam, KS, son Dennis of Topeka; daughter-in-law Debara Hanshaw; grandchildren Derek Hanshaw, Ashley Hanshaw, Tammy Dankenbring, Scott Zenger, Buffy Hemming, Thayne Poole and Norris Poole; great grandchildren Carli, Terry, and Brenden Dankenbring, Cody Allen, Rylie and Daxton Hemming, Camren Hanshaw, Peyton and Brice Zenger, Owen Poole, and Haylee Trimble; sister LaVon (Jim) Nigh, Omaha, NE; brothers Richard Menke, Fairbury, NE and Don (Marilyn) Menke, Washington, KS; sister-in-law Phyllis Menke, Fairbury; other relatives and friends. Funeral services were held Thursday, July 18, 2013 at the Tibbetts-Fischer Funeral Home, Belleville, Kansas. Burial was in the Morrowville Cemetery. Memorials may be made to the family's choice to be designated at a later time. Tibbetts-Fischer Funeral Home, Belleville, Kansas was in charge of these arrangements.

To order memorial trees or send flowers to the family in memory of Marguerite Hanshaw, please visit our flower store.