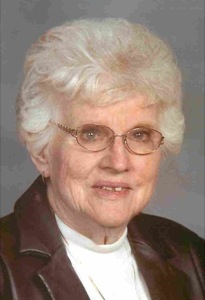 Visitation:  Friends may sign book for Marilyn at the Funeral Home

Marilyn Joyce (Harter) Haase, 84, died peacefully at home Friday, March 15, 2013. She was born October 25, 1928, in Winfield, Kansas, the daughter of A.V. and Leta Maude (Harper) Harter. She was preceded in death by her husband, H. James Haase, to whom she was married for 53 years before his death in 2007. She was also preceded in death by her parents and her sister, Dorothy Lee (Harter) Rake. She graduated from Caldwell High School and Kansas University. Mrs. Haase (as she was known to hundreds of her students) taught high school English at Belleville High School for 23 years until her retirement. She was active in P.E.O. and As You Like It. She is survived by her four children: son, Steve Haase, of Lawrence, KS; son, Mark Haase and wife, Judy, of Blue Springs, MO; son, Paul Haase, of Belleville, KS; daughter Jennifer Haase Morris and husband, Paul, of Whidbey Island, WA; grandson, Shea Haase and wife, Ashley, of Lenexa, KS; granddaughter, Alyssa Haase of Lawrence, KS; and four step-granddaughters and two step-grandsons. The deceased chose direct cremation with no formal visitation. The memorial service will be at 11:00 a.m. on Saturday, March 23, at First United Methodist Church, Belleville, followed by a lunch reception. The family will have a private inurnment. Memorials may be made to Meadowlark Hospice.

To order memorial trees or send flowers to the family in memory of Marilyn Haase, please visit our flower store.