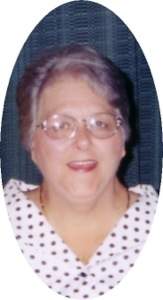 Mary Jo Aurand, age 68, daughter of Elmer and Dorothy Sealock was born January 11, 1942 in and went to be with our Lord Monday, July 19, 2010. She married Clarence Dean Aurand on April 3, 1960. To this union four children were born: Gail Anne, Wendy, Randy and Jill. Mary Jo was an avid member of the church, her voice filled the church with beautiful music and she also directed many Easter cantatas. She also enjoyed sewing, quilting and spoiling her five grandchildren. Every year her yard was filled with colorful blooms. Mary Jo and Clarence farmed north of Courtland, and after her husband's death, she worked in the field of veterinary medicine for Dr. Lannie Hanel and Dr. Victor Hurtig. Mary Jo is survived by her children, Gail Anne Aurand, (Courtland), Wendy Muir, husband Ray and children Patrick and Andrew ( , ), Randy Aurand and children , and Emma Grace ( , ), and Jill Aurand ( ). Her brothers Arlen Sealock (Bristol, Tennesse), and Tom Sealock and wife Shari (Grand Island, Nebraska), brother-in-law Ray Aurand and wife Marlene (Salina, Kansas), sisters in law Judy Sealock (Lonetree, Colorado), Vera Aurand (Prairie Village, Kansas), Marion Mahoney and husband Jim (Overland Park, Kansas), Thelma Day (Roscoe, Illinois), and many nieces, nephews, relatives and friends. She also leaves behind her adopted family Peg Nelson, Bradley Burris and the community of Courtland which was a very important part of her life. She is preceded in death by her beloved husband Clarence Dean, parents Elmer and Dorothy, brother Jim Sealock, brother-in-law Daryl Day, and sister-in-law Charlotte Sealock.

Funeral services were held 10:00 AM, Friday, July 23 2010 at the with Pastor Chuck Peters officiating. She will be laid to rest next to her adored husband at , rural Hardy, . Memorials may be made to an educational fund for Mary Jo's grandchildren. Tibbetts-Fischer Funeral Home, was in charge of these arrangements.

To order memorial trees or send flowers to the family in memory of Mary Aurand, please visit our flower store.