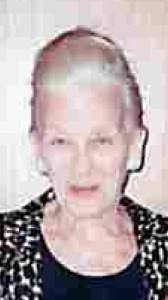 Memorials:  To The Naomi Healthcare Fund

Mary Anne McClough "Annie" joined her Heavenly Father on Monday, October 1, 2012 from the Republic County Hospital in Belleville, Kansas at the age of 85 years. She was born on September 2, 1927 at Ft. Screven on Tybee Island off the coast of Savannah, Georgia. She was an "Army Brat". Her father, grandfather, three brothers, first husband (Anthony Vincent Radice), and her oldest daughter were all members of the military. Mary Anne traveled, lived and worked on military bases/posts for the first 33 years of her life before finally ending up in Duluth, Minnesota in 1960 where she settled down and stayed. She worked as a legal secretary for Attorney William Montague representing Reserve Mining until he retired in 1973. She was then employed by the firm (currently Dryer, Storaasli, Knutson & Pommerville Ltd.) and retired from the law firm which she loved and considered her "other family" in 2007 in her 80 th year of life! During those working years, she also worked evenings and weekends for the old Holiday Inn on Park Point. In August of 1969, Mary Anne was married to William J. McClough (Willie) and extended her family with his son Jeffrey and family. They were married until his death in 1994. "Annie" was preceded in death by her parents Bernard A. and Ruth (Kidwell) Sanders; three younger brothers, Bernard A., Jr. (Sonny), Arthur F. (Dink), and Neil K. (Sandy) Sanders; and daughter Antoinette (Toni) Radice. She will be forever remembered by her daughters Ruth Anne Sederlin and husband Eugene, Courtland, Kansas and Nicolette (Nikki) Boutilier of Ottawa, Canada; son Jeffrey McClough and wife Caroline of Illinois; loving sister-in-law, a true sister Helen Sanders of Mississippi; sisters-in-law Audrey Drescher and Margarita Sanders; grandchildren, Caleb Radice, Santa Cruz, CA, Lisa & Eric Isaacson and family , Courtland; Doug & Jo Sederlin, Belleville, Bruce Sederlin, Scandia, Linda Pounds and family, Courtland; Robert & Cindy Sederlin and family, Grand Junction, CO, Steven & Renee Sederlin and family, Courtland, Richard Sederlin, Michelle, Sarah, and Jessica Boutilier all of Canada; several great grandchildren and great, great grandchildren. Annie McClough was the "most remarkable" mother, grandmother, sister, friend any individual could run across in their lifetime...we miss her to "The depths of being"...forever & a day.

To order memorial trees or send flowers to the family in memory of Mary McClough, please visit our flower store.