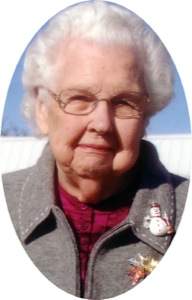 Alice Maxine Morey Blecha was born at her family home near on May 21, 1917, to Joseph F. and Viola Wolff Morey. Maxine passed from this life on Thursday, Jan. 6, 2011, at , at 93 years of age. She was the youngest of her family, having four brothers. She attended and graduated from in 1935. She began teaching in rural schools of Republic and Washington Co., while also attending . On May 26, 1940 Maxine was united in marriage to Ben Blecha. To this union three children were born, Kay, Kathryn and Keith. From 1941 to 1943, Ben co-owned a gas station near their farm. When Ben began farming full time, Maxine took pride in assuming the roles and responsibilities of a farmer's wife. Their agriculture achievements included the Skelly Ag. Award and the Banker's Soil and Conversation Award. Maxine was active in her community, belonging to the Munden and , teaching Sunday School, and serving as president of the United Methodist Women's group. She enjoyed serving as a 4-H leader, was a 50 year member of Eastern Star, and participated in MM Club, Sewing Club and Rebekah Lodge. Maxine saw many wondrous sights in her 93 years; from Native Americans passing through her father's farm to water their ponies to getting her own email address. Maxine was preceded in death by her husband of 57 years on Jan. 6, 1998, her parents Joseph and Viola Morey, brothers, Victor, Virgil, Ward, and Wade. Those remaining to cherish her memory are sons, Kay and Mary (Roney) Blecha of Denver, CO; Keith and Carol (Johnson) Blecha of Pineville, LA; and daughter Kathryn and Dennis Bartak of Lincoln, NE; her grandchildren and great-grandchildren, Susan (Bartak) and Brett Osborne, Ben and Gretchen of Mechanicsburg, PA; Brad Bartak, Bronson and Erin of Lincoln, NE; and Mitchell Blecha of St. Louis, MO.; other relatives and a host of friends.

Funeral services were held Monday, January 10, 2011 at the in with Pastor Harvey Farnsworth officiating. Burial was in City Cemetery. Memorials may be made to the Maxine Blecha Memorial in care of Tibbetts-Fischer Funeral Home who was in charge of these arrangements.

To order memorial trees or send flowers to the family in memory of Maxine Blecha, please visit our flower store.