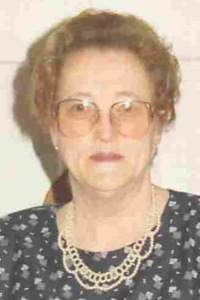 Fern Maxine Liby, daughter of Mack and Esther (Johnson) Clark, was born December 17, 1926 at Bala, Kansas near Clay Center. She passed from this life Wednesday, May 16, 2012 at Long Term Care in Belleville at the age of 85 years. Fern was married to Glen E. Liby on December 24, 1943 at Clay Center, Kansas. Maxine ran a restaurant at Norway, Kansas from 1956 to 1962. Till 1969 she worked at various restaurants around the area; operated the Bel-villa from 1968 to 1974; ran the country club for a couple years; and the Corner Grill until she retired. While at the Corner Grill she also served as an agent for the bus lines and Western Union. Maxine was preceded in death by her parents; husband Glen in 1992; three brothers, Charley, Mack and Wayne Clark; and three sisters, Flora Waite, Mary Liby, and Dolly Clark. She will be forever remembered by her son Leroy Liby, Belleville; daughters Ruth (Russell) Holton, Canton, KS, Glenda (Miles) Andrews, Orange Park, FL, and Shirley (Kevin) Bean, Murfreesboro, TN; seven grandchildren; three great grandchildren; a great, great granddaughter; brother Robert (Ruth) Clark, Herrington, KS; sisters Alice Shandy, Topeka, KS and Frances (Ron) Siesman, Scranton, KS; other relatives and friends.

To order memorial trees or send flowers to the family in memory of Maxine Liby, please visit our flower store.