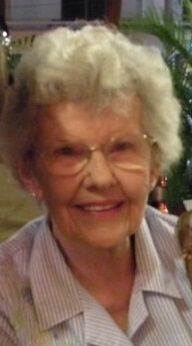 FAMILY WILL BE GREETING FRIENDS FROM 6:00PM TO 8:00PM FRIDAY EVENING AT THE FUNERAL HOME

Melissa N. Arbuthnot passed from this life on Tuesday, December 06, 2016 at the age of 92 years.  Melissa was born in Belleville, Kansas on September 20, 1924, to Samuel James and Nettie Ellen (Myers) Henry.  She was the youngest of their four children.  After graduating from Belleville High School in 1942, Melissa worked as the society editor of the Belleville Telescope.  She met Jim Arbuthnot of Republic, Kansas in 1944 when he returned on leave from flight training in Lubbock, Texas.  They were engaged to be married and Melissa rode alone , standing most of the time, and on a crowded war-time train to Mountain Home, Idaho, where Lt. Arbuthnot was stationed and where the two were married on February 8, 1945, at the Army Air Base Chapel.  The couple made their home in Boise, Idaho, until Jim was sent overseas to the China-Burma-India Theater as a B-24 bomber pilot.  After the war, they moved into housing at Sunflower Army Ammunition Plant east of Lawrence, Kansas, while Jim attended Pharmacy School at the University of Kansas.  They returned to Belleville in 1950 and Jim joined his father Sidney in business at Arbuthnot Drug Store.  Jim and Melissa had three children:  Jimella, Sandy and Bob.  Jim Arbuthnot passed away on October 26, 1985. Melissa was active in the management of Arbuthnot Drug Store in Belleville and owned and operated card and gift stores in Belleville, Concordia and Lawrence until her retirement in 1990.  She was a life-long and active member of the First United Methodist Church in Belleville and involved in numerous organizations including United Methodist Women, P.E.O., Shakespeare Club and Eastern Star.  She also served on the USD 427 School Board for eight years.  In 1976, she was appointed by Kansas Governor Robert F. Bennett as a member of the State Highway Advisory Commission and served until 1980.  Marked by curiosity, quiet generosity, and an independent spirit, Melissa lived an active and unique life.  A lifelong aviation enthusiast, Melissa not only married a pilot, she trained as one herself in the early 1940s.  That passion for airplanes and flight also took her around the world where she visited countries on five continents.  After her husband’s death, she continued their tradition of cheering on the Jayhawks at KU men’s basketball games.  She also made annual trips to Vail, Colorado, where she first learned to ski at the age of 62.  An excellent seamstress, Melissa delighted in making beautiful dresses and coats for her daughters and granddaughter when they were young.  Melissa loved music, particularly musicals, Big Band and ragtime, and her home was always filled with music whether from the stereo or playing her own piano.  As wife, mother and grandmother, Melissa was deeply devoted to her family.  Hers was a life that proudly defied expectations.  Melissa was preceded in death by her parents, husband, brothers Elbert Henry and Jim Henry, and grandson, Kenton Mai.  She is survived by her daughter Jimella Mai of Overland Park, Kansas her daughter Sandy Arbuthnot and husband Michael Michaud of Lawrence, Kansas, son Bob Arbuthnot and wife Susan of Belleville, Kansas; four grandchildren, Kyle Mai of Kansas City; Sarah Lendt and husband Brian of Overland Park; James Arbuthnot and wife Jennifer of Lawrence; Dan Arbuthnot of Lawrence; and four great-grandchildren, Katie Mai and Allison Mai of Kansas City and Katie Lendt and Sam Lendt of Overland Park.  She is also survived by her sister, Margaret Berger Atwell, of Chicago, granddaughter-in-law Crystal Mai, of Lawrence, KS. as well as numerous nieces and nephews.  Funeral services will be held Saturday, December 10, 2016 at the First United Methodist Church, Belleville, Kansas with the Reverend Emily Meckley officiating. Burial will be in the Belleville City Cemetery. Memorials may be made to the Church or the Belleville Public Library. Tibbetts-Fischer Funeral Home, Belleville, Kansas assisted the Arbuthnot family with these arrangements.

To order memorial trees or send flowers to the family in memory of Melissa Arbuthnot, please visit our flower store.