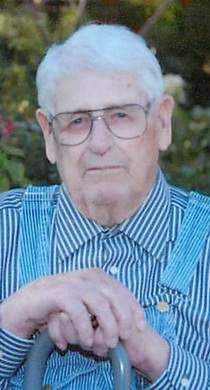 Milford Johnson, age 98 of Waxahachie, Texas formerly of Courtland, Kansas passed away Wednesday, January 15 at Ennis Regional Hospital in Ennis, Texas. He was born January 9, 1916 at Formoso, Kansas to Martin and Bessie (Clark) Johnson. He graduated from Montrose High School in 1935. Milford and Dorothy Eloise Payne were married in 1939 in Formoso at her parent’s home. Milford farmed in the Formoso area until he and Dorothy had two sons and they moved to Colorado. He farmed in Manzanola, Colorado until 1968 when they moved back to Courtland. Milford began working for the Kansas Bostwick Irrigation District until he retired. He was a member of the Courtland Covenant Church. Milford lost his wife of 59 years in October of 1998. He continued to live in Courtland until he moved to Texas to live with his son Lane in 2008 and part of the time he also lived with his son Gary in Arkansas. Milford loved his family and was a wonderful friend to many. His favorite thing to do was play card games. Skip-bo was his favorite and especially enjoyed a game of dominos. The last few months of his life was spent at Legend Oaks Nursing Home in Ennis, Texas. Everyone there called him “Paw Paw”. Milford was preceded in death by his parents; wife Dorothy; sister Doris; and brother Cecil. He will be forever remembered by his sons: Gary and wife Marjorie of Eureka Springs, Arkansas, Lane and wife Annie of Waxahachie, Texas, and Don and wife Carolyn of Waconia, Minnesota; seven grandchildren and eleven great grandchildren. Funeral services will be held 10:00am Saturday, January 25, 2014 at the Covenant Church in Courtland, Kansas with Pastors Chuck Peters and Jake Englebert officiating. Burial will be in Balch Cemetery near Formoso, Kansas. Memorials may be made to the church. Family will greet friends one hour prior to the service at the church. Tibbetts-Fischer Funeral Home, Belleville, Kansas is in charge of these arrangements.

To order memorial trees or send flowers to the family in memory of Milford Johnson, please visit our flower store.