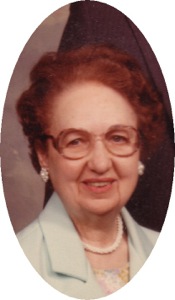 Minnie Catharine Noble, daughter of Lewis Martin and Margaret (McElroy) McPeek, was born June 27, 1910 on a farm in near Hoxie. At the age of three her parents moved to , four miles south of . She attended Excelsior country school. At the age of ten her parents moved south of . Minnie then attended the city schools, graduating from in 1928. Through the years, she worked in various stores as a clerk and bookkeeper. On November 15, 1942 Minnie was united in marriage to Orville H. Noble and to this union one son was born, Melvin Lee. The first three years of their married life were spent in , while Orville was stationed at , serving his country during World War II. They returned to the area and in 1959 settled in Agenda, where Orville was a rural mail carrier. In 1975 he was transferred to where they lived until his retirement in 1980. They again returned to where they since lived. Minnie was a member of the United Methodist Church of Belleville. She loved her home, family, and many friends. Minnie passed from this life Friday, December 10, 2010 at the Long Term Care facility in having reached the milestone of 100 years. She was preceded in death by her parents; her husband Orville on December 3, 2005; brother Ora McPeek; sisters Lucy Spafford and husband Hugh, and Alice Myers and husband Wylie. Minnie will be forever remembered by her son Melvin Lee Noble of , ; grandsons Charles Lee Noble, , , Michael David Noble, , ; her niece Huetta Derowitsch, rural ; great nieces and nephews, other relatives and friends. Funeral services were held at 2:00pm Friday, December 17, 2010 at the in with Pastor officiating. Burial will be in the . Tibbetts-Fischer Funeral Home, , was in charge of these arrangements.

To order memorial trees or send flowers to the family in memory of Minnie Noble, please visit our flower store.