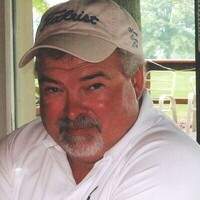 This is a courtesy posting for the Rhine family.

Monty was a graduate of Hillcrest High School in Cuba and a 1989 graduate of Kansas State University with a Bachelors Degree in Ag Economics.  He was currently the co-owner of J. M. Staffing Agency in Topeka.  Monty graduated from the Colorado School of Banking and previously worked in banking in Arizona, Wyoming and Kansas.  He was also a founder and co-owner of Czechland Outfitters in Cuba with his brother, Heath and friends, Cass Reynolds and Jay T. Reynolds.

Monty was a member of Wamego Country Club where he was an avid golfer.  He enjoyed hunting, diving and his passion for corvettes but his greatest joy was the time he spent with his family and his dogs, Bentley and Louie.

Funeral services will be held Saturday evening at 6:00 in the Campanella & Stewart Funeral Home in Wamego with Pastor Jol Klein officiating.

Visitation will be Saturday evening from 5:30 until the time of services at the funeral home in Wamego.

Graveside services will be Monday morning at 11:00 in the Hawks Cemetery in Cuba, Kansas with Pastor Randy Paugh officiating.

Memorials may be made to the Wamego Country Club and left with Campanella & Stewart Funeral Home, P. O. Box 48, Wamego, KS 66547.

To order memorial trees or send flowers to the family in memory of Monty Rhine, please visit our flower store.