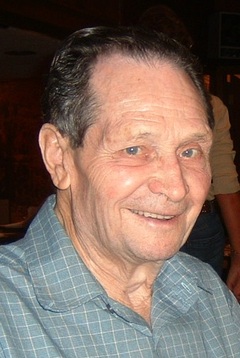 Reflecting back on a person’s life is always an interesting experience, particularly when it is your Dad.

Myron was a product of the Great Depression, born in 1920 to parents who might have been called nomads or possibly squatters, living on other people’s land sometimes for very short periods, until the law “encouraged” them to move on.  He attended 12 different grade schools in 8 years but was in high school the whole time in Elsinore, Missouri, graduating at age 16.  While he wanted to attend college to be an engineer, it just wasn’t possible.

Those frequent moves as a youth forced him to make friends quickly and influenced his ability to the very end to visit with nearly anybody!  He learned to survive on nearly nothing, no money, no food and no debt.  As a very young boy he would ride his bicycle 3-5 miles into town to try to sell anything – like chickens, ducks, rabbits or eggs to get some money.  During this period he learned about kindness and helping others.  Occasionally someone would simply buy a chicken to help the kids.  He never forgot those experiences.  He lived his entire life reaching out and trying to help others.  In the Norway community there were many instances where he would step in and quietly assist others with food, transportation or simply a visit.

Following high school he moved to the Marysville, Kansas area and took a job in a grain elevator in Home City.  During this period he met his first wife (my mother) Blanche Brooks.

In 1942 he entered the Army during World War II and served in the Aleutian Islands in Alaska the majority of the time.  During a leave home before heading out to Alaska, Myron and Blanche were married on June 20, 1942.  Twin boys – Jim and Paul (stillborn) arrived in 1948.

Following the war he returned to the Home City area and back to the elevator.  In 1946, he learned of an opportunity to run a grain elevator in Norway, Kansas and he and Blanche moved into the community.  He subsequently purchased the elevator and ran it until the early 1980’s when he sold it to two of his employees.  He continued to work there for several years for the new owners.

In 1982 Blanche predeceased him.  In 1984 he married Irene Johnson and relocated to the Courtland area.  Following her death in 2000, he moved to the Belleville area and remained there until the end.

Church was important to him.  In Norway, he was actively involved in the local Methodist Church – in leadership positions, in fundraising and simply attending.  When he moved to Courtland with Irene he became active in the Ada Lutheran Church and most recently in the Courtland Methodist Church.

Myron was always involved in his community – trying to make it better for everyone.  He spearheaded the campaign to pave Main St. in Norway; was involved in creating and manning the volunteer fire department in Norway.  He created boys baseball teams in Norway and then organized a league of teams from around Republic and Cloud Counties.  He was actively involved in establishing a rural water district for the Norway and surrounding areas.  This allowed farms and pastures to have fresh running water.

His military service and his patriotism were always strong with Dad.  He felt strongly about honoring its veterans.  He was active in the VFW and participated in honor guards at probably hundreds of funerals, parades and Memorial Day services at various cemetaries in the area.  He had the privilege to participate in the Honor Flight to Washington, DC a few years ago to visit the World War II memorial.

Dad had his hobbies – he loved his little farm with 120 acres, about half farmland and half pasture.  After working long hours and the stress of running the grain elevator, he loved to go to his farm, get on his little tractor and take care of things, sometimes late at night.  This was his way of relaxing.

He liked to square dance and travel.  Blanche didn’t care for these, but Irene did – so when they got together, they started square dancing regularly and went to many events and made new friends.  Irene liked to travel as well and they went on many tours, not only in the United States, but also to Europe and Hawaii and even combined their interests with several square dancing cruises in the Caribbean.  They both enjoyed several trips with the Friendship Club to Branson, MO to take in the Christmas shows.

Dad always liked to be doing things, visiting friends or going somewhere.  He had season tickets to various plays in Abilene, Salina and Concordia.  He enjoyed Kansas State basketball – particularly the women’s – and had season tickets for many years.  At his apartment in Belleville, he organized events, driving his friends to many plays, dinners, etc. – probably longer than he should have.  When he lost his driver’s license in the Fall of 2012 and thus his freedom, it was the beginning of the end.

Dad enjoyed his grandchildren – Melissa, Laura and Karen.  He would come to Cleveland once or twice a year to visit and take in the girls’ events.  He never missed one of their major events – confirmations, graduations, weddings, etc.  They, in turn, enjoyed spending time with him on the farm in the summers.  They could see the “papa cow”, the pigs, the cats, take in the rodeos, ride in his old car and drive his pickup in the pasture – and almost into the pond!

Dad was always on the go and didn’t like to slow down or sleep much.  He had a saying “there will be plenty of time to sleep when I’m dead.”  We had the pleasure of enjoying him for over 93 years.  Now he can sleep to his heart’s content.

Thanks for the memories!

Myron Reed's wishes were for direction cremation. The family will greet friends Friday, March 7, 2014 from 6pm to 8pm at the funeral home.  Inurnment will be at Pleasant Hill Cemetery, Concordia, Kansas at 9:30am with military rites.

To order memorial trees or send flowers to the family in memory of Myron Reed, please visit our flower store.