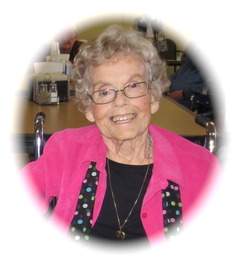 Visitation will be Monday 9am to 8pm; Tuesday family will be greeting friends from 6pm to 8pm.

Nellie Coleen Hogle McChesney was born March 14, 1921 on a farm west of Mahaska, Kansas. The Hogles soon moved to a farm east of Narka and Nellie attended Narka Grade School and Narka Rural High School. She married Chet McChesney on June 6, 1939. To this union, two children were born: Don in 1942 and Sally in 1949. Nellie was a homemaker with a small beauty shop in her home until 1955 when she attended the Salina Beauty Academy. She then opened Nellie’s Beauty Shop in Munden which she operated for over 50 years. Nellie passed from this life Wednesday, May 14, 2014 at the Long Term Care facility in Belleville at the age of 93 years. She was preceded in death by her parents William and Callie (Vining) Hogle; sisters Sarabel Craft and Wilma Blecha; brothers Lester and Wesley Hogle; and her husband of 67 years, Chet in 2006. She will be forever remembered by her son Don and wife Karol and daughter Sally Splichal and husband Phil all of Munden; five grandsons and families: Marc McChesney and sons Max and Jack of Oklahoma City, John McChesney and fiancée April Doyle and children James, MacKenna, Shanna, and Owen of Belleville, Ryan and Becky Splichal and son Finn of Omaha, NE, Mitch and Peggy Splichal and children Jefferson and Hannah of Wilmington, NC, and Nicolas and Julie Splichal and children Keaton and Kody of Riley, KS; many other relatives and a host of friends. Nellie was a life-long member and was active in the Munden Methodist Church and United Methodist Women. She was an organizer and avid supporter of the many Munden celebrations and activities. Further, she was a member of the M & M Club, a 4-H sewing leader, and was instrumental in the organization of the original Kansas Junior Miss competition. Her Junior Miss association lasted for over 30 years.

Funeral services were held Wednesday, May 21, 2014 at the Zion Evangelical Church, Munden, Kansas with Pastor Harvey Farnsworth officiating. Burial was in Maple Grove Cemetery rural Narka, Kansas. Memorials are to the Family’s Choice to be designated later. Tibbetts-Fischer Funeral Home, Belleville, Kansas was in charge of these arrangements.

To order memorial trees or send flowers to the family in memory of Nellie McChesney, please visit our flower store.