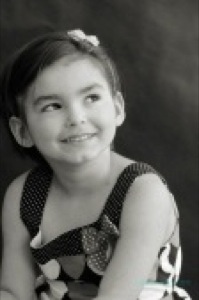 Nevaeh Denise Paredes, the daughter of Brandon "Craig" and Julie Paredes, was born on May 22, 2007 in Ft Lewis, Washington. She passed away Thursday, November 3, 2011 at the Texas Children's Hospital in Houston, Texas at the age of 4. Nevaeh came into this world a strong little fighter. She was born with complications that required her to stay in the hospital for a month. Nevaeh brought much joy and light to everyone, including the nurses and family friends. She lived in Ft Lewis until July of 2009 when her father was deployed to Afghanistan. Nevaeh and her Mom then moved back to Courtland, KS where they were close to family and friends while her Dad was deployed. While in Courtland she loved attending the Doodle Bug Academy in Belleville as much as she could because she enjoyed learning and being around kids. She also enjoyed going to Pinky's where she would follow Pinky around, until she stole his heart. She could con a sucker off everyone at Pinky's as if it was a game to see how many she could get. Yet she always shared her suckers with everyone. She also enjoyed going to Grammy and Grampy's house on the farm where she would plant garden, ride tractors and combines, or just go along to help move equipment around. Nevaeh was a farm girl through and through, she was known to scold her Grammy and Grampy for gathering the eggs without her. She also enjoyed going to her Aunt Darcie's house to hang out with her cousins Kota and Kenzie. Nevaeh and Mom loaded up the car and drove to Washington in July of 2010 when Dad was returning from Afghanistan. Then the whole family came back to Courtland to stay until it was time to move to Colorado Springs in October, where Dad was to be stationed at Ft Carson. Nevaeh always knew "We may not have it all together, but together we have it all". Even at the age of three Nevaeh was leading her Mom and Dad. In October 2010 Nevaeh, Mom and Dad moved to Colorado Springs, Colorado. She enjoyed attending preschool at Pikes Peak Park Baptist Church where she made more friends, including her boyfriend Ryan. She told her Mom that she was going to marry Ryan, so she could be a princess and Ryan could be her prince. Her Daddy was never fond of Ryan, but she didn't care because Ryan has a morhak (mohawk). Nevaeh never cried when she went to school, she was never upset to see Mom and Dad leave. She always welcomed a challenge and a new day. April 30, 2011 Nevaeh was diagnosed with terminal brain cancer in her brain stem which hit everyone hard. A week before her 4th birthday Nevaeh began radiation and chemotherapy, but during this time Nevaeh still wanted to be with her friends. Nevaeh was the only 4 year old child to ever undergo radiation treatment without sedation. There were many adults who had trouble with being fastened to the table for radiation, but not Nevaeh. She would be caught laying there giggling as if she was telling a joke. During her time at Denver children's hospital Nevaeh touched the lives of many nurses and doctors both with her attitude and her selflessness. Other children would cry and scream before even entering the treatment clinic. Nevaeh would look at them and say "Awkward!", or "Someone is not happy!". That's how Nevaeh was all the way up until the day she got her wings on November 3rd 2011. Nevaeh's greatest gift was the ability to see the little things that everyone tends to passes by. She would find flowers in the grass to collect and pass on to whoever she thought needed a smile. Nevaeh always had that twinkle of light both in her personality and her eyes. If someone was sad she would cheer them up either with a hug, a flower, or just her incredible since of humor. Nevaeh was the most selfless child, she never wished for toys on stars, or prayed for possessions. She was an angel, that old brave little soul sent to teach everyone to love deeper and to appreciate everything, including the little beautiful things in life. She was preceded in death by her Grandmother-Marcia Denise Paredes and Great Grandparents-Loren and Leta Silsby, Ellen Swartz, Lydia Korte and Elva Hanson. She will be greatly missed by her Grandparents-Darrell and Judy Hanson of Hardy, NE, Al and Crystal Paredes of Concordia, KS, and Charles Korte of Lewisville, TX. Great Grandparents-Jesse and Olga Esparza of Dallas, TX, many aunts and uncles, nieces and nephews as well as a host of other relatives and friends. A Celebration of her life was held Thursday, November 10, 2011 at the Republic School gymnasium, Republic, Kansas with Pastor Josh Knaub officiating. She was laid to rest by her grandmother Denise in Washington Cemetery south of Byron, Nebraska. Memorials may be made to the Nevaseh Paredes Memorial Fund. Tibbetts-Fischer Funeral Home, Belleville, Kansas was entrusted with these arrangements.

To order memorial trees or send flowers to the family in memory of Nevaeh Paredes, please visit our flower store.