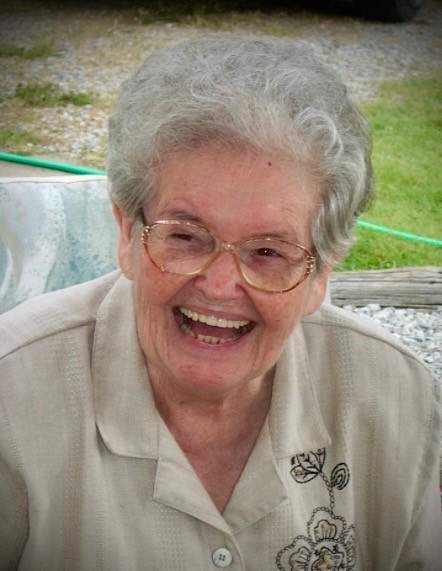 Norma Jean Greenslade was born on March 16, 1928, to John Duaine Greenslade and Alice Lora (Cardwell) Greenslade in their family home in Scandia. She was baptized and confirmed in the Amana Lutheran Church of Scandia. Norma graduated from Scandia High School with the Class of 1946.

Norma was united in marriage to Delbert C. Aspegren on April 20, 1947 at the First United Methodist Church of Topeka and to this union four children were born: Phyllis, Ron, Jane Ann, and Carrie. Family was always her first priority. Her husband, children, grandchildren, and great grandchildren meant the world to her. Norma went to be with the Lord on Thursday, June 16, 2022. She was 94 years of age.

In her younger years, Norma was an active member of the Order of the Eastern Star, the General Federated Women’s Clubs, Sherdahl Boosters 4H, Daughters of the American Revolution, and Girl and Boy Scouts, holding many leadership rolls. Delbert and Norma raised their children in the church and were very active in all church activities including Luther League, Bible School, Sunday School, and WELCA. They were also associate members of the Love of Christ Lutheran Church, Wesleco, TX. Norma helped establish and open the Svensk Butik in Scandia and loved handmade crafts. Norma server as a cook for many years at the Scandia High School, USD #426.

Delbert and Norma were avid campers and belonged to the Pawnee Palefaces Camping Club for many years. In the 70’s, they began taking their camper to Texas and eventually purchased a winter home at Countryside RV and Mobile Home Park, in Donna, TX, making life-long friends from all over the US and Canada. Norma took an active role in assisting her husband Delbert in the operation of their office, the Clarence L. Gile Insurance Agency for 33 years. In her later years, she greatly enjoyed writing a column for the Scandia and Courtland Journal.

Norma was proceeded in death by her parents, her husband Delbert, son-in-law Jim Jensik, and son-in-law Stanley Grueber.

Visitation and viewing will be Monday, June 20, 2022 from 9am-7pm at the funeral home. Funeral services will be at 3:00 pm, Tuesday, June 21, 2022, at Amana Lutheran Church in Scandia with PMA Marilyn Dunstan officiating. Order of Eastern Star will be conducting Memorial Rites during the service. Burial will be in the Scandia Lutheran Cemetery, rural Scandia.

Memorials can be made to the Amana Lutheran Church, Scandia Museum, or North Central Kansas Health Care Foundation, and may be sent in care of the funeral home.

To order memorial trees or send flowers to the family in memory of Norma Aspegren, please visit our flower store.