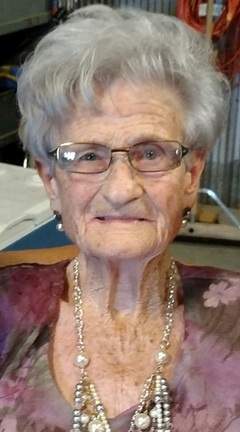 Norma Jean Brunsilius, age 88, went to be with the Lord on Thursday, August 3, 2017 at Integris Hospital, Grove, OK.  She was born on September 12, 1928 in Rural Chester, NE to David Carl and Francis Ida  (Lehman) Mathiesen.

Norma Jean, the oldest of three, grew up in the rural Chester area and was baptized and confirmed at St. John’s Lutheran Church in Chester.  Norma married Thayerman Henry Brunsilius on October 3, 1948 in Chester.  To this blessed union five children were born: Rhanda (Rhonda) Jean, Larry Charles, Morris Kim, Rene Rochelle, and Lori Ann.  Norma was a lifelong area resident and farmed alongside her husband and family east of Belleville on the Brunsilius Homestead.  She worked as a housekeeper, head cook, and had a flag car escort service. Norma could fix about any vehicle, or farm implement due to Thayerman being a mechanic. She was a member of the American Lutheran Church, a lifetime achievement blood donor, and a wonderful mother and friend to all who knew her.  She was most proud of her children’s achievements and enjoyed family gatherings.  To Norma - life’s most precious memory was the joy of children, grandchildren, and great-grandchildren.

Funeral services at 11:00 am at the American Lutheran Church, Belleville, KS on Saturday, August 12, 2017; Pastor Thomas R. Kamprath officiating.  Norma will be laid to rest at Pleasant Hill Cemetery of rural Belleville. Funeral arrangements through Tibbetts-Fischer Funeral Home of Belleville. Visitation will be held Friday, August 11 th from 1:00 to 7:00 pm; family receiving friends from 5:00-7:00 pm at the funeral home.

In lieu of flowers, memorials will be given to the Republic County Historical Society Museum of Belleville honoring Norma’s love of agriculture and history.

To order memorial trees or send flowers to the family in memory of Norma Brunsilius, please visit our flower store.