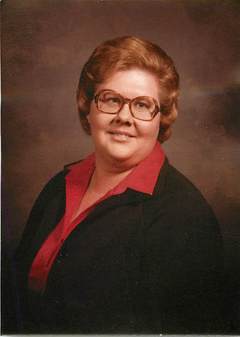 Patricia Elaine Blackburn, middle daughter of Robert (Bob) and Eunice (Aspegren) Blackburn, was born June 5, 1950 in Concordia.  She attended Kackley Grade School for 8 years and then graduated from Courtland High School in 1968.  She started working at Babe Houser Dealership soon after graduating and then became a teller at the 1 st National Bank in Concordia, where she eventually was promoted to the head of the loan department.  Trish’s love of art became a reality when she started working for Marion Walker at Guds Atelje in Scandia.  She eventually became the owner and moved the business to Courtland.  Her artistic flare and attention to detail was evident in the number of cakes she decorated for people, always with much praise.  She also worked numerous part time jobs including as a guide for the Pawnee Indian Village, Church secretary, and helping with Meals on Wheels.  Trish left this world on Wednesday, April 11, 2018 at Mt. Joseph Senior Center in Concordia, Ks.  She was preceded in death by her parents, sister Pam (Jack) and brother-in-law John.  Trish will be forever remembered by her sister Carla, nephews Shane (Hannah) and Seth, nieces Nici (Ryan) and Tami (Mitch), great nieces and nephews, cousins, and friends.  Her motto was “Be Courageous but Be Kind” which is how she lived her life.

According to Trish’s wishes, direct cremation was chosen. A graveside memorial service was held Monday, April 16, 2018 at the Courtland Cemetery where she will be laid to rest by her parents. Pastor Richard Cox, Christian Church of Burr Oak, officiated. Memorials in Trish’s honor may be made to the Pike Valley Foundation c/o Swedish-American Bank, Courtland. Tibbetts-Fischer Funeral Home, Belleville, Kansas was entrusted with these arrangements.

To order memorial trees or send flowers to the family in memory of Patricia Blackburn, please visit our flower store.