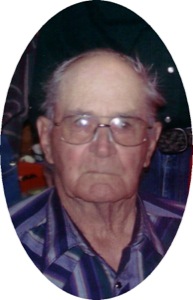 Pearl Edward Jeardoe, son of Jesse and Mable (Nondorf) Jeardoe, was born July 30, 1919 at . Early in his life, his family traveled to in a Conestoga wagon. Following his schooling, went to to shuck corn, but winter set in early and so bad that he returned home and then joined the United States Army in February 1941. He served in the during WWII. After his discharge in November 1945, returned to to farm. On June 6, 1948 he was united in marriage to Bernadean Awalt at and to this union four sons, Gary, Randy, David, Jesse, and a daughter Trudy was born. During his years of farming, worked at various jobs for his family which included Kravemore 81, Mayberry's Standard Station, the Concordia and Agenda Co-op Elevators, and Vault plant, Stockman's Livestock and Belleville 81 Livestock. was an accomplished baseball player during the war years and when he returned home played many years of semi-pro ball in the area. He enjoyed being with his sons as they played the game as well. Another passion of his was the corn shucking contests around the area. He was quite involved with the contest at being named the Republic County Champion in 1988. was a member and past Commander of the Baker-Holmes VFW post in . He also served for many years in various positions on the Lincoln Township Board. passed from this life unexpectedly on Saturday, December 4, 2010 at at the age of 91 years. He was preceded in death by his parents; grandson David Matthew Jeardoe in 1979; and his brother Alva. Pearl will be forever remembered by his wife of 62 years Bernadean of their home; sons Gary and wife Jacky, Concordia, Kansas, Randy, Assaria, Kansas, David and wife Karla, Belleville, Kansas, and Jesse and wife Jane, rural Concordia, Kansas; his daughter Trudy Beam, Narka, Kansas; 18 grandchildren; 23 great grandchildren; his brother Lee and wife Dora Faye, and sister-in-law Geneva Jeardoe all of Belleville, Kansas; many other relatives and a host of friends.

To order memorial trees or send flowers to the family in memory of Pearl Jeardoe, please visit our flower store.