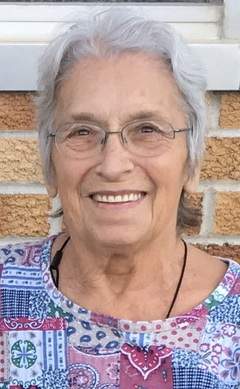 NO VISITATION, AS DIRECT CREMATION WAS CHOSEN.

Peggy Joan Nutsch Pierce was born to Henry and Alta (McCollum) Nutsch on the home place east of Haddam, Kansas, July 8, 1936. She passed from this life on Wednesday, April 12, 2017 at her home in Narka, Kansas at the age of 80 years. She was raised on a farm near Haddam, Kansas and attended the Blocker Country School until she went to High School and graduated in the 1952-1953 school year. At the age of 16 she chose for her life partner Cecil Pierce and they were married May 24, 1953 in Fairbury, NE. Together they raised nine children. Peggy worked by Cecil's side in every adventure he took on. They farmed in the Reynolds, Hubbell, and Narka areas in their early years. They then built and owned the Pierce's tavern in Byron, Nebraska for seven years until they moved to Mankato, Kansas where they first owned the Dreamliner motel and later built and owned the Hideaway Supper Club which was the first private club in Jewell County. In 1979 they moved to Jenkins, Missouri where Peggy continued to work with her crafts and ceramics. In 1983 Cecil and Peggy returned to Narka, Kansas and they operated a grocery store and restaurant for nearly 20 years. She attended craft shows and was a Certified Bob Ross Instructor teaching classes at the Fairbury community college and Hobby Lobby. She would paint for the residents in the nursing homes and at various events. She was well known in the area for her many talents, but she was most passionate about her dog kennel business. She raised and sold dogs her whole life and loved each and every one of them. Every one of her children, grandchildren, and great grandchildren has a handmade quilt crafted by Grandma. Peggy was preceded in death by her parents Henry and Alta Nutsch, three brothers, Jack, Lonnie, and Ernest Nutsch, a sister Rosa Nutsch, husband Cecil in 2015, and oldest daughter Charline Snyder, in 2004, and granddaughter Jessica Alcorn, daughter in laws Cathy Pierce, and Shelia Shoemaker.

Memorial services will be 4:00pm Wednesday, April 19, 2017 at the Presbyterian Church in Narka, Kansas. Family inurnment will be in National Cemetery south of Narka. Memorials may be made in Peggy’s memory to the Narka Fire Department. Tibbetts-Fischer Funeral Home, Belleville, Kansas was in charge of these arrangements.

To order memorial trees or send flowers to the family in memory of Peggy Pierce, please visit our flower store.