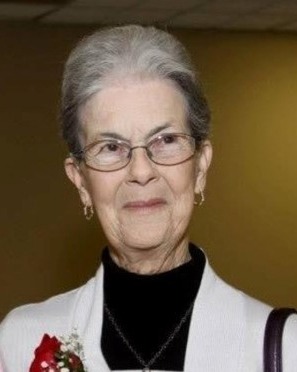 She was preceded in death by her husband and love of her life Wayne Allen, her parents, her step-father Elmer Nelson who she loved like a father, brother Robert (Bob) Whitley, sisters Bev Hall and Kay Zimmer, grandson Jeffery Allen, and many other beloved relatives.

Rita attended Courtland High School and married Wayne in Harrisburg, PA, on February 23, 1952.  While Wayne was in the army, the couple moved to Anchorage, AK, before returning to Kansas to farm near Courtland.  They then moved to Detroit, MI, for a few years before returning to Courtland permanently in 1961.  Rita worked several jobs outside the farm until retiring, including many years as office manager for MC Industries in Belleville.  She was a loving and supportive wife, sister, mother, grandmother, aunt, and a friend to all in the community she called home for nearly all her life.

Memorial Services will be held at 11:00 a.m., on Saturday, January 21, 2023, at the United Methodist Church in Courtland, with Pastor Sandra Jellison-Knock officiating.  Inurnment will be at Mt. Pleasant Cemetery in rural Courtland.

The family will greet friends at the church on Saturday, January 21, from 9:30 am until service time.

Family and friends may sign Rita’s book on Friday, January 20, from 9am – 5pm, at Tibbetts-Fischer Funeral Home.

Memorials may be made to the Church, and can be sent in care of the funeral home.

To order memorial trees or send flowers to the family in memory of Rita J. Allen, please visit our flower store.