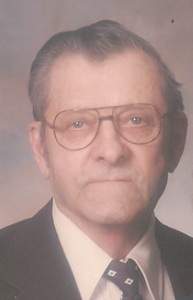 Robert William Yanish, son of Paul and Rosalie Yanish was born February 21, 1925 at Maine Prairie, Minnesota. He passed from this life Tuesday, October 22, 2013 at the Republic County Hospital in Belleville, Kansas. He was 88 years of age. Bob was a veteran of the United States Army during the end of WWII. Following his discharge, he returned home and began working. On he was united in marriage to Elaine Stickler on February 10, 1948 at midland, South Dakota and to this union two daughters, Shirley and Diane were born. Bob and his family moved to Courtland, Kansas in 1958. He first worked on the elevator while it was being built.  He then went to work farming for Frank and Ralph Stanley.  He also enjoyed carpentry in his spare time. Bob was preceded in death by his parents; son Roger and an infant son J.D. and infant daughter Mary Ann, several brothers and sisters. He will be forever remembered by his wife Elaine of their home; daughters Shirley Veach and husband Gary of Topeka, Kansas and Diane Lobdell of Belleville, Kansas; grandchildren, Kelly, Roger and Kevin Veach, Jennifer Jones, Brad and Craig Lobdell; brother Albert and sister Kathleen. Bob’s wishes were for immediate cremation services and the family will have a private inurnment service at the Courtland Cemetery.

To order memorial trees or send flowers to the family in memory of Robert Yanish, please visit our flower store.