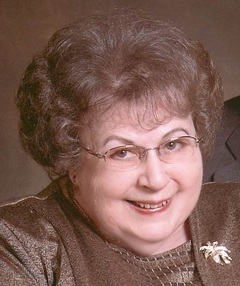 Rosanna Mildred Fredrickson, daughter of Harold A. and Mildred S. (Tillberg) Larson, was born February 1, 1945 at Salina, Kansas. She passed from this life Monday, April 14, 2014 at Mary Lanning Hospital in Hastings, Nebraska having attained the age of 69 years. Rosanna graduated from Lindsborg High School, attended Bethany College for a couple years and graduated from Kansas University.  She was united in marriage to Ronald Fredrickson at the Immanuel Lutheran Church in Salina, Kansas. To this union two sons, Jon and Jeremy were born.  Early in their married years Rosanna taught elementary children at Courtland, Concordia and various surrounding schools. Later she helped Ron on the farm and enjoyed making a home for him and the boys. Rosanna was always up early in the morning making sure that Ron had everything he needed for the day’s work, especially a hand packed lunch. She had a love for music and used her wonderful voice in the Courtland Community Easter Cantatas for many years. She was a faithful member of the Courtland Methodist Church. Rosanna was preceded in death by her parents. She will be forever remembered by her husband Ron of their home; sons Jon Fredrickson, Topeka and Jeremy Fredrickson, Scandia; her sister Carolyn Larson and Aunt Maxine Tillberg of Salina; several cousins; other relatives and a community of friends.

Funeral services were held Saturday, April 19, 2014 at the United Methodist Church, Courtland, Kansas with Pastor Kathy Aeillo officiating. Inurnment was in Riverview Cemetery, Scandia. Memorials may be made to the Methodist Church. Tibbetts-Fischer Funeral Home, Belleville, Kansas was in charge of these arrangements.

To order memorial trees or send flowers to the family in memory of Rosanna Fredrickson, please visit our flower store.