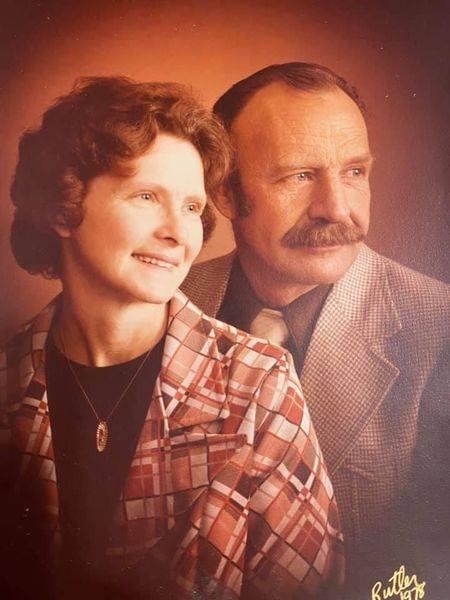 Rosemarie Johnson was born on September 19, 1932, near Gresham, Nebraska, the daughter of Birger and Rosie (Bristow) Gulbrandson. Rosemarie was one of 14 children born to Birger & Rosie, and she grew up in the Gresham / Stromsburg, Nebraska communities, graduating from Stromsburg High School in 1950.

On July 6, 1950, Rosemarie was united in marriage to Richard L. Johnson in Osceola, Nebraska, and to this union, five children were born.

Rosemarie and Richard started their married life in Lincoln, Nebraska, before relocating to Belleville in the 1990s, where Rosemarie lived the rest of her life. She worked as a housekeeper at Belleville Health Care Center.

Rosemarie is preceded in death by her parents, her husband Richard in 1998, seven brothers, three sisters, and her son Roland.

She will be greatly missed and forever remembered by her children, daughter Kathleen Reuter of Belleville, daughter Barbara Thompson and her husband Steve of Falls City, Nebraska, son Richard “John” Johnson Jr., of Lincoln, Nebraska, daughter Annette Johnson of Belleville, and daughter Mary Ann Collette of Concordia. She is also survived by 15 grandchildren, 23 great-grandchildren, and one great-great grandchild. Rosemarie is also survived by her sisters, Mary Alice Friesen of Waverly, Nebraska, sister Martha Ann Huggler of Osceola, Nebraska, and sister Ella Mae Johnson of Stromsburg, Nebraska.

The family chose cremation, with private, family services to be held later in the spring at Belleville City Cemetery. Memorials are requested to the Belleville Public Library, and may be sent in care of the funeral home.

Tibbetts-Fischer Funeral Home of Belleville assisted the Johnson family with these arrangements, www.tibbettsfischerfuneralhome.com

To order memorial trees or send flowers to the family in memory of Rosemarie Johnson, please visit our flower store.