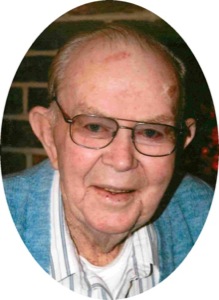 Russell Gerald "Rusty" Nelson, son of John and Hilda (Anderson) Nelson, was born June 27, 1922 on the family farm one mile south of Courtland, Kansas. He was baptized August 29, 1922 and confirmed November 28, 1937 at the Ada Lutheran Church and was a lifelong member, singing in the choir, serving as an usher, and served on the Church Board. Rusty attended and graduated from Courtland High School with the class of 1940. He enjoyed playing basketball and continued to support the Courtland Tigers after graduating. He was united in marriage to Josephine "Jo" Cooksey on April 14, 1945 in Norton, Kansas and to this union three daughters Linda, Gayle, and Lynette were born. Rusty sold Moormon's Feed for 30 years retiring in 1986. He was top salesman numerous times and worked closely with his customers to address their livestock questions and concerns. He also farmed and raised livestock. Rusty loved his family, church, and his community where he served on various committees and was always willing to lend a helping hand. Rusty passed from this earthly life Monday, February 6, 2012 at the Belleville Health Care Center at the age of 89 years. He was preceded in death by his parents; wife Jo in 2007; sisters Lenora, Blanche, and Arden; and brothers Chet, Harold, and Rudolph (Dude). Rusty will be forever remembered by his daughters and their families: Linda Grover and husband Christian, Punta Gorda, FL and their children Kristopher & Audrea George and daughter Parker, Helena, MT, Heather & Charlie Ferguson and son Stone, Chesapeake, VA; Gayle Hudson and husband Jim, Courtland and their children Karey & Mark Padding and son Gavin, Andover, KS, Kayla & Brian McCartney and children Dylan and Mia, Belleville; Lynette Engelbert and husband Jake, Courtland and their children Joshua and Mara; brother Marvin (Ila) Nelson, Mankato, KS; nieces, nephews, other relatives and friends.

Funeral services were held Thursday, February 9, 2012 at the Ada Lutheran Church, Courtland, Kansas with Pastor Art Bliese officiating. Burial was in Ada Lutheran Cemetery. Memorials may be made to the church, Belleville Health Care Center or Solomon Valley Hospice. Tibbetts-Fischer Funeral Home, Belleville, Kansas was in charge of these arrangements.

To order memorial trees or send flowers to the family in memory of Russell Nelson, please visit our flower store.