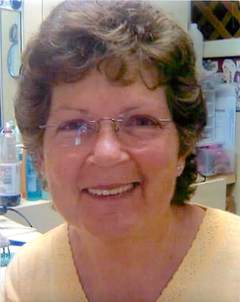 Sarah Jane Tomlinson Hill, daughter of Ernest and Gladys (Bailey) Tomlinson was born April 28, 1942 at Emporia, Virginia. She went to be with her Heavenly Father Saturday, December 12, 2015 at her home in Courtland, Kansas surrounded by her loving family. Jane was 73 years of age. She was united in marriage to George Lee Hill on May 27, 1959 and together they raised two daughters, Janice Paige and Rebecca Kay. Besides the loving care she gave to her family, Jane worked for many years as a supervisor for the Franklin Braid Manufacturing Company. Together they made their home in Skippers, Virginia near Emporia. Jane loved her family dearly and demonstrated her love for them in so many meaningful ways. She was an avid shopper and in the last few years was quite involved with her many Facebook friends. Having visited Janice and family in Courtland the years, she and George moved to the Courtland community permanently in 2015. She loved her new home and the many wonderful friendships she has developed here. Jane was preceded in death by her parents; an infant sister and her brother Ernest Leonard Tomlinson. She will be forever remembered by her husband George of their home in Courtland; daughters Janice and husband Jacob Millias and Kay Edleman and husband Jack; grandchildren Michael Garrick Harding Cruz, Tabitha Glenn, Megan Miller, Katherine Millias, and Sarah Millias; great grandchildren Kaylin Harper, Tyree Harper, Evelyn Colson, Eldon Miller, and Scarlett Tracy. Jane’s family would like to also express their thankfulness to Drs. Walker, Beck, and Johnson and the staff at Republic County Hospital, Jewell county Hospital, and Salina Regional for their exceptional care for her.

Jane’s wishes were for direct cremation. A memorial gathering was held at the Living Waters church in Courtland, Kansas on Sunday, December 13, 2015. A family inurnment service will be held at a later time. Tibbetts-Fischer Funeral Home, Belleville, Kansas assisted the Hill family with these arrangements.

To order memorial trees or send flowers to the family in memory of Sarah Hill, please visit our flower store.