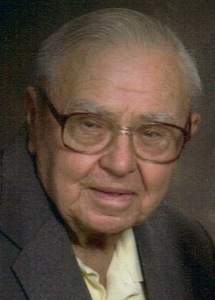 Stanley Joseph Popelka, age 90, passed away April 4, 2012 at his home in Belleville, Kansas. He was born, January 19, 1922 in Chelsea, Iowa to William and Christy (Bartak) Popelka. At the age of 7, Stanley moved with his family to Kansas in 1929. The family lived on a farm just east of Belleville. Stanley completed the 8 th Grade at Hill School after which he began his vocation as a farmer along with his Father and Brother, Henry. Stanley was inducted into the United States Army in September 1942 for World War II. He trained with a Medical Hospital Unit called the 54 th Evacuation Hospital. He worked in the kitchen, until they learned he was a farm boy and could drive large trucks. He first drove jeeps and then a large truck to transport water several times a day. The unit was deployed to New Guinea, Philippines, and then after World War II ended, Stanley was part of an occupying force watching over a prisoner of war camp in Japan.   He was honorably discharged in January of 1946. He returned to rural Republic County where he farmed the rest of his life, participating in farming up to six months before his death. Stanley was united in marriage to Mary C. Kieffer on May 24, 1952. They began their married life on the family farm just northeast of Belleville. Stanley farmed his entire life. To this union, nine children were born: James (and wife Wendy) Popelka, Belleville; Charles (and wife Jean) Popelka, Munden; Rosemary (and husband Dan) Wehkamp, Ingalls, KS; David (and wife Anita) Popelka, Salina, KS; Christine (and husband Morris) Wilber, Belleville; JoAnne (and husband Mike) Langley, Beatrice, NE; Steve Popelka, Jones, OK; Beth (and husband Andy) Ostmeyer, Joplin, MO; and Fr. Joseph Popelka, Manhattan, KS. Stanley was a member of St. Edward's Catholic Church and the Knights of Columbus, Council 2609, and the local VFW Post 3722. He is survived by his children, 23 grandchildren, 11 great-grandchildren, and his siblings: Libby Hallack and Mary Reed, both of Belleville; and one brother, Eddie (and wife Barbara) Popelka of Cuba, KS. He was preceded in death by his parents, and one brother, Henry Popelka, and two siblings who died infancy in Iowa. Funeral services will be held 10:30am Monday, April 9, 2012 at St. Edward Catholic Church, Belleville, Kansas with Father Joseph Popelka officiating. Burial will be in St. Katherine Cemetery rural Belleville. Memorials may be made to the Stanley J. Popelka Memorial to be designated later. Visitation will be Saturday 4-8pm and Sunday 1-5pm at Tibbetts-Fischer Funeral Home, Belleville, Kansas. A Vigil / Rosary service will be 7:00pm Sunday at St. Edward Catholic Church. Visit www.tibbettsfischerfuneralhome.com.

To order memorial trees or send flowers to the family in memory of Stanley Popelka, please visit our flower store.