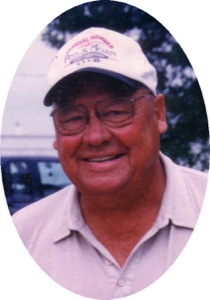 Sylvan Harris, age 89 of , , died Monday, April 11, 2011 at the in . He was born October 21, 1921 in to Osborne and Cora (Swisher) Harris. Sylvan married Mary Niblock on May 24, 1942 at Moreland and they moved to where he worked at Boeing. In 1944 Sylvan went into the armed services serving in the Army Air Force until he was discharged in 1946. Following the service, Sylvan and Mary moved to , and he worked as an independent mechanic in . After several years, he changed jobs and worked in the oil fields until 1967 at which time the family moved to , where he became the Manager at , a position he held until his retirement in 1987. Sylvan loved going to his grandkids sports and activities which put a lot of miles on his vehicles. His favorite pastime was the game of golf. Sylvan will be forever remembered by his wife Mary of their home in Courtland; three sons, Dennis and wife Dot of Minneapolis, Kansas, Floyd and wife Norma of Downs, Kansas, and Larry of Solomon, Kansas; a daughter Peggy Crumb and husband Dale of Dodge City, Kansas; 13 grandchildren; 26 great grandchildren; his brother Eldon Harris and wife Donna of Florida; many other relatives and a community of friends. He was a life member of the V.F.W. and American Legion; a member of the Masonic Lodge of Courtland, NCK Shrine Club; and a Tennessee Squire. Sylvan enjoyed helping on many of the Courtland community events throughout the years. Funeral services were held Friday, April 15, 2011 at the , with Pastor officiating. Burial was in the . Masonic services were conducted by Courtland Lodge No. 211 A.F. & A.M. and Military Rites were conducted by Fort Riley Honor Guard. Memorials may be made to the Shriners Children's Hospital or the .

Tibbetts-Fischer Funeral Home, was in charge of these arrangements.

To order memorial trees or send flowers to the family in memory of Sylvan Harris, please visit our flower store.