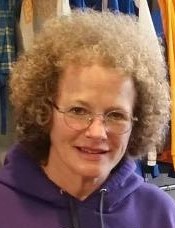 Tyra Lea Frye, daughter of Verne A. and Betty E. (Swaney) Frye, was born March 6, 1963 in Belleville, Kansas.  Tyra went to grade school and after the death of her father the family moved to Tonganoxie, Kansas where she graduated High School. She was very active and enjoyed all sports and riding her pony. Following her graduation from Tonganoxie High school, Tyra enrolled in Kansas State University and graduated in 1984 and received a Bachelors degree in Business.

Tyra returned to the Belleville community and established the Goose Crossing. It was a coffee shop with the original soda fountain from which she served fountain drinks and ice cream. In 1996 she established Purple Splash ink & stitch. She owned and operated this business until her death.

Tyra fought ovarian cancer for almost five years. She never complained and continued to work at Purple Splash every day. He battle with cancer came to a close Saturday, December 19, 2020 while a patient at the Republic County Hospital in Belleville, Kansas. She was 57 years of age. She was preceded in death by parents; and her brothers Terry and Todd. Tyra will be forever remembered by her husband Lannie Hanel (married June 30, 2007); siblings Troy, Trish, Tracey; several nieces and nephews; other family and many friends.

A memorial gather will be announced later in 2021.

Memorials are requested to the Tyra Frye Memorial, and may be sent in care of the funeral home.

Tibbetts-Fischer Funeral Home of Belleville assisted the Frye family with these arrangements, www.tibbettsfischerfuneralhome.com

To order memorial trees or send flowers to the family in memory of Tyra Frye, please visit our flower store.