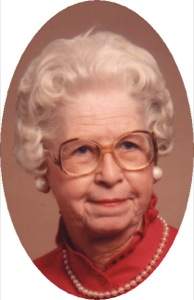 Velda Charlotta Anderson Linden was born August 23, 1919 to Charlie Elmer and Elin Otilla (Ekstrom) Anderson at their home south of . She attended Bollen District 100 elementary school and graduated from with the Class of 37. Velda was united in marriage to Glenwood Loring Linden January 2, 1941. To this union two children were born, Robert Neill and Judith Elin. Until he was drafted into the army during WWII, she and Glenwood both worked in the shipyards in . After the war the family moved to , where she had various seasonal jobs picking fruit and working in the canneries, and also as a seamstress at , in 1952, the family moved back to where she worked at the Republic grocery store. Velda enjoyed sporting events, cooking, baking, and playing all kinds of games and cards. She was a loving wife, mother, grandmother, and great grandmother. Velda was preceded in death by her husband Glenwood in 1987, Republic; her parents Charlie & Elin, Courtland; and her three brothers, Harold and , Courtland, and Carl, . She will be forever remembered by her son Robert of Edmonds, Washington and daughter Judy Erkenbrack and husband Dennis, Republic, Kansas; grandchildren Conrad (Julie) Linden, Marysville, WA, Merritt (Karl) Poulsen, Lynnwood, WA, Brett (Sonia) Erkenbrack, Concordia, KS, and Kinda (Mark) Williams, Paola, KS; great grandchildren Kyle, Jacob, Allison, and Nathan Linden; Blake and Drew Erkenbrack; and Taylor, Skyler, and Garrett Williams; sisters-in-law: Doris Anderson, Spring Valley, CA, Florence Linden, Lincoln, NE, and Jetty Evert, Santa Ana, CA; brother-in-law Cliff Evert, Santa Ana, Ca many dear nieces and nephews; other relatives and friends.

Funeral services were held Tuesday, March 9, 2010 at the , Republic, with Pastor Roger Walls officiating. Burial was in , . Memorials may be made to the church or to Cloud County Women's Basketball program.

To order memorial trees or send flowers to the family in memory of Velda Linden, please visit our flower store.