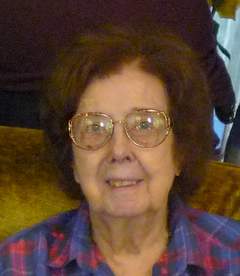 Violet Colvin Williams, 102, died peacefully in her home in Austin, Texas on January 28, 2016. Members of her family were with her at her passing. She was born Violet Agnes Colvin on September 6, 1913 in Helena, Montana. When her Mother died in 1918 she came to Belleville, Kansas by train to live with her uncle and aunt, John P. and May Belle Norris. She became their beloved only child. Violet graduated from Belleville High School in 1931, where she met Arthur Williams. She worked for four years at Firemen's Insurance Company in Belleville while Arthur attended K-State, and they married on Thanksgiving Day, 1937. Arthur’s job with the Federal Bureau of Prisons took them to live in many places: Leavenworth, New York City, West Virginia, Virginia, Texas, Washington, D.C., and Missouri. They were in West Virginia during World War II, where Violet was enlisted to work as a clerk. They thought so highly of her work that she was asked to stay on, but she needed to move with Arthur when he was promoted. When Violet wasn't busy raising her two children she was involved in many community volunteer activities, too many to list them all. In 1957, when she was a Girl Scout Troop Leader in Washington, D.C., she took her troop to meet Queen Elizabeth. From 1967 - 1971 Violet was a active member of the Jefferson City, MO, Capital Area Chapter of the Red Cross, culminating with the role of Chairman of Volunteers, coordinating all activities for the chapter house and state. Violet and Arthur moved back to Belleville when Arthur retired in 1971. In Belleville, she was a member of As You Like It, a women’s social club she had co-founded in 1930 that was still in existence. Violet volunteered at the library and enjoyed hosting a women's circle in her home. She and Arthur drove for Meals on Wheels for 12 years, until his death in 1984. She was a nearly life-long member of the Belleville Presbyterian Church and it's longest known continuous member. She kept up her membership for 90 years, even when she lived elsewhere. In 1995 Violet left Belleville and moved to Boise, Idaho to be near her daughter Patricia Heyrend. In 2005 she moved to Austin, Texas, where her daughter Linda still lives. Up until her death she enjoyed living independently in her own condominium, spending time with Linda and reading mysteries. Violet was preceded in death by husband Arthur O. Williams, daughter Patricia Williams Heyrend, parents and all her brothers and sisters. She is survived by her daughter, Linda Lodwick, grandchildren Larry Brent Rightmeier and Mona Rochelle Connolly, five great-grandchildren, one great-great-grand-daughter and many other family and loved ones. Violet Williams was kind and generous to all. She had an easy laugh and was a loyal and thoughtful friend to those she met. Violet was devoted to her family, always putting their welfare first, and in later years enjoying frequent visits. She was a wonderful mother, knowing when to insist and when to allow experience to be the best teacher. In 1964 she and another mother chartered a bus, sold tickets to a bunch of fourteen-year-olds and drove 150 miles so her daughter Linda could see the Beatles in concert. In recent years, Violet received Meals on Wheels in Austin, and the volunteers who brought her meal each week were very kind. Their quick check in and visit were valuable in a way that is hard to quantify and the family is very grateful. No funeral or memorial services will be held. Her family will be present when Violet is buried next to Arthur in Belleville Cemetery on Saturday, September 10, 2016. Any donations in Violet's memory can be made to the Belleville Public Library. Tibbetts-Fischer Funeral Home, Belleville, Kansas assisted with the local arrangements.

To order memorial trees or send flowers to the family in memory of Violet Williams, please visit our flower store.