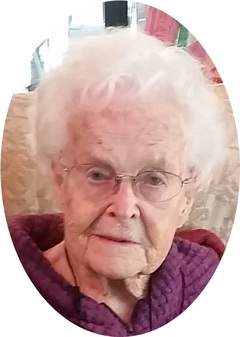 Virginia Lee Marshall Nylund passed away on Saturday, February 24, 2018 at Belleville Health Care Center.  She was born July 18, 1920 at the family home in Union Valley Township, Scandia. Virginia Lee was the daughter of Benard Oscar Marshall and Gladys Brown Marshall.  She graduated from Scandia High School in 1938. On November 30, 1941 she was united in marriage to John Jefferson Nylund.  He passed away March 4, 2000.

Virginia worked at the Republic County Register of Deeds Office and worked from home for Kansas Crippled Children Organization typing case files for many years.

Virginia loved being on the farm and being involved in all aspects of farm life, alongside her husband and the love of her life, John.  She was a member of the United Methodist Church Women in Scandia.

Her grandchildren were always a source of love and pride for Virginia, or Grandma Gino as most of them called her.  She went to many events they participated in:  gymnastics, baseball, basketball, football, track, golf, speech and drama, and two Eagle Scout Awards. She also got to attend some of her great grandchildren’s sporting events in other states including golf and soccer.  Whenever the grandkids had a “special” event Virginia and John were there to support them.

Virginia loved her home on the farm.  One of her great joys in life were watching the deer, turkeys and her beloved birds out her big picture window, right up to December 6, 2017 when she had to be hospitalized.

Visitation will be 5pm to 9pm Thursday, March 1, 2018 at Tibbett’s Funeral Home, Belleville, KS.  Family will be greeting friends from 6 to 8pm. Funeral service will be at 10:30 a.m. on Friday, March 2, 2018 at Tibbett’s Funeral Home, Belleville 1104 20 th St., Belleville, KS.  Inurnment will follow at Riverview Cemetery, Scandia, KS. Memorials may be made for the Family’s Choice to be designated at a later date.

To order memorial trees or send flowers to the family in memory of Virginia Nylund, please visit our flower store.