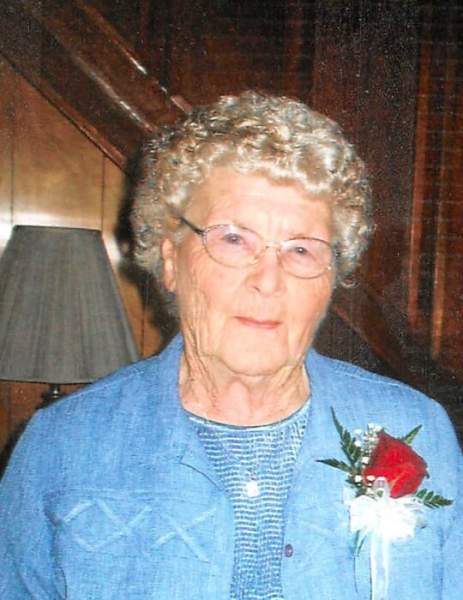 Virginia Eleanor McGowan was born on July 12, 1920, to Charles E. McGowan and Mary Elizabeth (Singer) McGowan in their home, three miles south of Hardy, Nebraska. She passed away on July 20, 2022, in Belleville, at the age of 102.

Virginia attended country school through 8th grade, and graduated from Hardy High School in 1937.  After graduation, Virginia earned her teaching certificate and taught in rural country schools for a number of years before marrying Alvin H. Petersen on May 25, 1943 at St. Paul’s Lutheran Church, Hardy, Nebraska, which they regularly attended, and sang in the choir, most of their married life.

To this union, two children were born; Rodney in 1944 and Carol in 1948.  Virginia and Alvin began married life on a farm north of Hardy.  They moved to the Republic, Kansas area in the spring of 1946 where they farmed until moving into Republic in 1958.  Virginia and Alvin began working at the Republic Grain Elevator.  Virginia was a long time correspondent for the Belleville Telescope for the Republic news. She was an avid reader and served on the Ray Hobson Memorial Library for many years.  In later years, Virginia worked as a waitress at the Foote’s Café in Chester, Nebraska.

Her husband, Alvin, passed away in 1988, shortly after their 45th wedding anniversary. Virginia moved to Belleville in 2014 to be closer to her daughter and family. Virginia was preceded in death by her parents; her sisters, Wanda (Glenn) Hutt, Dorothy (Kenny) Erkenbrack, Jean (Leo) Snavely; and brother Dean (Viola) McGowan.

Funeral Services will be Monday, July 25th, 2022, at 10:00 a.m., at the American Lutheran Church in Belleville, with Mr. Al Urich officiating. Burial will follow at Lake Cemetery, rural Republic.

Memorials may be made to St. Jude’s Children’s Hospital, and may be sent in care of the funeral home.

Tibbetts-Fischer Funeral Home is assisting the Petersen family with these arrangements, www.tibbettsfischerfuneralhome.com

To order memorial trees or send flowers to the family in memory of Virginia Petersen, please visit our flower store.