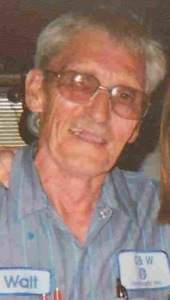 Walter Junior Hamilton was born June 18, 1941 at Boscobel, Wisconsin, to Walter and Belva (Hardy) Hamilton. He passed from this life Monday, May 14, 2012 at the Grace Hospice Care Center in Madison, Wisconsin at the age of 70 years. He was married to Barbara Davis and they had to children Charlynn and Shawn. While living in Sun Prairie, Wisconsin, he worked for Hanley Implement Company for several years. Wanting to see the country, Walter traveled from town to town with the Carnival for nearly 20 years. He moved to the Courtland community in 1992 and worked as a diesel mechanic for Jeff Sothers at C & W Farm Supply. As his health declined, he moved back to Wisconsin to be near his daughter and family. Walter is survived by his four legged companion "Little Giz"; daughter Charlynn Hamilton and her daughter Teryn of Sun Prairie, WI; son Shawn Hamilton of Salem, OH; sister Alice Jones, Raymore, MO; brother Charles, Owens, TN; other relatives and friends. A graveside memorial service and inurnment will be held 2:00pm Saturday, June 16, 2012 at the Courtland Cemetery. Tibbetts-Fischer Funeral Home, Belleville, Kansas was in charge of these arrangements.

To order memorial trees or send flowers to the family in memory of Walter Hamilton, please visit our flower store.