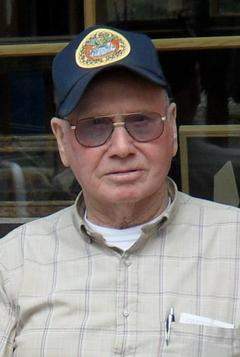 There will be no services or visitation, as Wayne's wishes were to be cremated with a private family inurnment at a later date.

Wayne C. Kearn passed away on February 29, 2016, at his home in Concordia, Kansas. Wayne was born on April 11, 1927, near Emporia, KS. He was born at home to Carl and Mary Kearn. Brothers Melvin and Charles, and sister Ruby, were born after him. At the age of 14, Wayne left home. He joined the army when he was 17 and served in Germany toward the end of World War II. Soon after his discharge, he met his wife, Lorena Forgue, from Aurora, KS. They were married in 1948 at the Catholic church in Aurora. They started their family soon afterward with the birth of a daughter, Mary. They soon moved to southern California where they added 3 boys: Steven, Joseph, and Patrick. Wayne had several occupations in California but what he liked best was driving. From driving a bread truck to heavy equipment, he seemed to enjoy just “being behind the wheel”…any wheel. After raising his family, he and Lorena moved to Texas where he drove a semi tanker truck hauling crude oil from the oil fields. After retiring, they moved to Idaho, then back to Concordia, where he spent the last 20 years of his life.  He enjoyed spending time with friends at “the coffee shop” and the Baptist Church in Concordia. His Christian faith was important to him and he took many opportunities to share God’s love with others. He is survived by his sister Ruby Bork of Milford, KS, 3 children, 6 grandchildren and 3 great-grandchildren.  His wife Lorena, daughter Mary, and grandson Justin preceded him in death.

To order memorial trees or send flowers to the family in memory of Wayne Kearn, please visit our flower store.