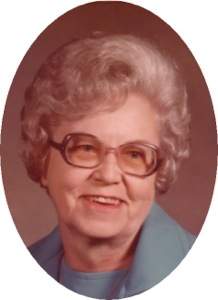 Wilda Leah Eickmann Novotny, the third child of Louis and Mattie (Randels) Eickmann, was born May 13, 1913 in northern . She passed from this life Monday, March 21, 2011 at the Belleville Health Care Center in at the age of 97 years. Wilda attended Victor rural school and graduated from in 1930. She was a graduate of and . Wilda served in schools for 43 years, teaching in Republic, Geary, and as a classroom teacher, reading teacher, learning disability teacher, and principal. During WWII she was united in marriage to Charles Novotny. Following his service in Europe in 1945 they established their home in . In 1959 they moved to , where she taught in the schools. They were members of the Presbyterian Church. Charles passed away in November of 1972. In the spring of 1977, Wilda took her aged father into her home and cared for him until his death in 1981. In 1979 Wilda retired and returned to where she resided until her death. She was laid to rest beside her husband in the . She was preceded in death by her parents; husband; brothers Mervin and Erskine Eickmann; sister Eathel Peters; and nephew Eugene Peters. Survivors include her nieces Clarice Peters and Mary Gustin; nephew Steve Eickmann; several great nieces and nephews.

To order memorial trees or send flowers to the family in memory of Wilda Novotny, please visit our flower store.